For Winston in other continuities, see Winston disambiguation page.

Winston is Lara Croft's butler in the Croft Manor.

Winston was born on February 7th, 1924 in Connussie, Ireland. He was decorated in the El Alamein desert campaign under Montgomery during World War II. He was honorably discharged after being wounded in battle.

He returned home and worked with his father as a gamekeeper under the laird on the local estate. He formed a bond with Lord Henshingly Croft upon organizing pheasant shooting excursions and was requested specifically into service by him on the mainland. As Lara's parents continued their world excursions, Winston became like a father to her.

In Tomb Raider III, he follows you in the same way. Later, Lara can pick up her pistols at the end of the Assault Course. When these are picked up, Winston will appear in a camouflage suit. You can shoot him and he will raise his tray in defense. (TR3: "Lara's Home")

Winston only appears in the FMVs here. He is one of the three who are holding a memorial service for Lara, after she is presumed dead.

A fun game that is very popular among the fans, was locking Winston in the walk in freezer. As he always follows you. To do so, you would have to run into the kitchen, open the fridge by using the button, get inside the fridge and wait for Winston to appear. Then quickly run out, leaving him behind and press the button to shut the door again. 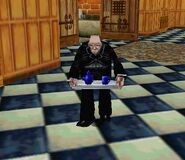 Editions Atlas Concept Art
Add a photo to this gallery

Retrieved from "https://tombraider.fandom.com/wiki/Winston_(Original_Timeline)?oldid=54389"
Community content is available under CC-BY-SA unless otherwise noted.