"Hold your yapping tongue for want I clip it!"
―Verdilet[src]

Vladimir Kaleta was possessed by a demon named Verdilet on the Black Isle in Connussie, Ireland.

"I, Vladimir Kaleta, who worshipped in the first Kremlin, who butchered the Swede under Nevsky ('s orders) on the banks of the River Neva."
―Verdilet[src]

According to what he tells Lara and Father Dunstan, Vladimir Kaleta was once a solider who "worshipped in the first Kremlin"--likely the Detinets--and fought at the Battle of the Neva under the command of Prince Alexander Yaroslovich.

Some time around the year 1282, Vladimir was promised the gift of eternal life by a "pox ridden Abbot" by way of an ancient scroll. However, the demon was trapped when the Abbot tricked him into a barn surrounded by running water, which demons can not pass.

"...I taste freedom for the first time in an aeon."
―Verdilet[src]

Seven hundred years later, on 23nd April 1982[1], Father Patrick Dunstan and Lara Croft - investigating rumors of a demonic presence on the Black Isle - encounter the demon. First, Lara meets Verdilet after meeting up with Father Patrick. She is nearly decapitated as Verdilet rides by on his horse. Lara trips and falls, after which Verdilet dismounted and lifted Lara off her feet. However, Verdilet spares her, throwing her aside. The second time she encounters him, Lara is in the middle of drawing a warding spell (an Arcane Symbol) with a piece of chalk. The spell is either not completed, incorrect or not strong enough, as he leaps off his horse and attempts to kill her with his sword. Father Patrick saves her life, throwing her out of the way of the blade. Verdilet then turns his attention to Father Patrick, grabbing him and knocking him out then throwing him over his horse and riding off with him.

Lara pursues them, finding the barn, Father Patrick and the demon rider. Attempting to intimidate them both, he tells them his story and threatens several times to kill the priest. He then holds Father Patrick hostage, promising to release him only if Lara dams up the waters around the barn and thus releasing the demon. Otherwise, Verdilet threatens to "gut (Father Patrick) like livestock".

Navigating past varied dangers, including a malicious Sea Hag, Lara succeeds and shores up the stream around the barn. Verdilet does indeed spare Father Patrick, but does not give the same consideration to Lara. Advancing menacingly towards Lara, Father Patrick tells her to use a book she obtained in a Library--the Bestiary--on the island and read the names contained inside. Lara finds his name at the last second, causing him to freeze in place just as he moves to strike, ending Verdilet's newfound freedom.

Having spoken his name, Lara now holds control over him. He is ordered by Lara to "go back where he came from" and she and Father Patrick both leave the island. 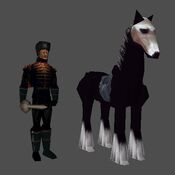