Unknown (referred to as male by Amanda)

The Unknown Entity (also called the Force Monster[1] or Wraith Creature) is a creature featured in Tomb Raider: Legend.

It was linked to an artifact called the Wraith Stone, able to summon it and, in some cases, fuse with its user into a more powerful version of itself. It was originally in a tomb in Paraíso, Peru, and later found and controlled by Amanda Evert.

During an expedition in Peru, the creature was awoken by a team of archeologists, including a young Lara Croft and Amanda Evert. The dig started off playfully enough, with Amanda teasing Lara about falling behind. However, the screams of their companions after coming in contact with the creature caused them to cease their playful excursion, just before witnessing the creature slaughter some of their friends.

Lara and Amanda managed to escape the massacre as the site collapsed. Trapped in a large room, Amanda spied the Wraith Stone. With no other alternatives, Amanda pried the stone from the wall, hoping it could help. The creature then vanished, but the removal of the stone caused the room to begin flooding and a cave-in to occur. With Amanda's foot trapped underneath falling rocks and water quickly rising, Lara was forced to leave, only after witnessing her friend's apparent death from said rocks.

Nevertheless, Amanda survived, thanks to the help of the creature, which obeyed her as a result of her taking the Wraith Stone. From that day, Amanda could summon and even merge with the Entity at will, simply by wielding the stone which she wore as an amulet necklace. Using the creature for her own selfish endeavors, she trained it to attack anyone who opposed her.

This was seen during Lara's expedition to Ghana, where Amanda infiltrated the Croft Manor, looking for the Ghalali key. Using the Wraith monster, she subdued Zip and Alister, and stole a pair of their headspeakers to be able to talk to Lara.

Amanda returned to the Dais in Bolivia to wait for Lara, knowing she would have the reforged Excalibur, which would act as a key to activate the Dais. Lara, however, wouldn't part with the sword and slaughtered Rutland and his men. Enraged, Amanda merged with the beast in order to kill Lara. However, Lara was able to finally defeat the beast with the help of Excalibur. Lara then took the Wraith Stone from Amanda and locked it inside her vault.

The Unknown Entity appeared to evolve as it aged, growing larger in size and gaining the ability to fly, as apposed to running around on its arm-like appendages like it was only seen doing during the Peru expedition. It seemed to gain the ability to shoot projectiles of harmful energy as well. When under Amanda's control, she was able to use the Wraith Stone to heal the creature's wounds. In Kazakhstan, if Lara shoots the Unknown Entity with a giant electromagnetic Tesla cannon, its health bar will almost deplete, causing Amanda to feel enraged and regenerate its health. Later, in Bolivia, when fused with the Wraith creature, Amanda was able to restore its health several times after being hit with Excalibur.

The Unknown Entity resembles a demonic creature with no legs, two large arms with long claws, and a skull like head with sharp teeth and yellow, glowing, featureless eyes. It also has a number of long dark tendrils protruding from its back and is clouded in what resembles to be black smoke. 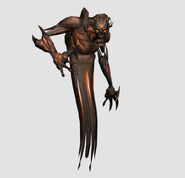 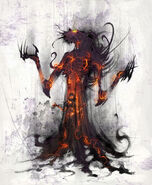 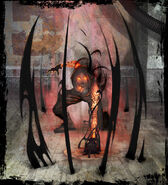