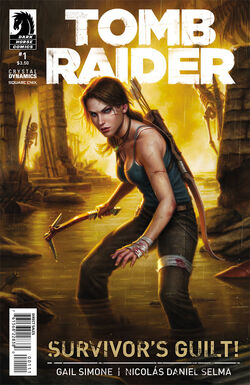 Tomb Raider made an official return to comics following the 2013 reboot by Dark Horse Comics. The comics were made with the intention of chronicling the events in Lara's life between the games during the timeline.

Tomb Raider: The Beginning, the official prelude to the game, written by Rhianna Pratchett. The artwork was done by Nicolas Daniel Selma and Andrea Mutti.

Lara Croft is part of the crew aboard the Endurance, owned by Conrad Roth, awaiting the arrival of famous archaeologist Dr James Whitman, who is hoping to use the ship as a vessel in the search of the mythical kingdom of Yamatai. He hopes of revitalizing his career. When Whitman's show is cancelled and the funding lost, Whitman attempts all he can to fund the show himself. We learn how the rest of the Crew came together.

The first arc is written by Gail Simone. The artwork is created by Nicolás Daniel Selma.

In the weeks following Yamatai, Lara is suffering from survivor's guilt, coupled with nightmares and flashbacks. Her fellow survivors are also suffering, claiming that they are haunted by "Guardians." Several bizarre instances make Lara question her hold on reality, specific whether what she saw on Yamatai actually happened. Things take an even worse turn, when Jonah tries to kill himself and Sam is once again kidnapped by a new organization, causing Lara to return to Yamatai to save her best friend. A mysterious man named Danny saves Lara from Reyes. He seems to have knowledge of the people hunting Lara, but Lara cannot shake the feeling that he seems familiar.

Issue 03: Haunted by the Past

Issue 05: Sacrifice for a Friend

Issue 06: On the Brink of Madness

The second arc was written as a collaboration between Rhianna Pratchett and Gail Simone. Artwork was done by Derlis Santacruz for issues 7-9 and by Nicolás Daniel Selma for issues 10-12.

While trying to bond with Reyes, Lara is visited by an apparition of Alex, who asks her to save his sister, Kaz. Lara departs for Pripiyat. Lara finds Kaz and learns that she is the target of her former employers, a mysterious group known as Trinity. The man hunting her is an agent of the Trinity, Mr. Cruz. After a massive fight, Mr. Cruz is believed to be dead. Lara invites Kaz to live with her and Sam in London. While Lara promises Jonah that she will appear in his staging of Pride and Prejudice, Mr. Cruz tracks them down, now intent on killing them both.

Issue 12: Fall of the Curtain

The third arc is written by Rhianna Pratchett. Artwork was done by Derlis Santacruz.

Lara receives a tape that leads her to believe that Grim is alive. He is being held for ransom by a mysterious group, known as Las Serpientes Que Caminan. This prompts Lara to head to Mexico in order to rescue them. Sam begins acting strangely and Lara begins to worry about her. Lara learns of a missing child whilst she is in the jungle. Lara heads off on her own to find Grim, coming across the missing child. After returning her to the village, Lara heads off again to find Grim. After being captured, Lara is reunited with "Grim" only to find that it is in fact Grim's twin brother, Cuddy. The pair escape and go to rescue Sam, Jonah and Kaz. Interestingly enough, Sam kills one of their captors in a blind fit of rage. Returning home, Sam begins to act even more erratically, resulting in her being arrested for assault and locked in a mental ward. Himiko reveals herself to Lara, saying she is in Sam's head. Lara vows to free Sam.

Issue 15: Of Myths and Monsters

A second series of comics has been confirmed to be released in 2016 to bridge the gap between the Rise of the Tomb Raider and the third game in the timeline.

The fourth arc was written by Mariko Tamaki. Artwork was done by Philip Sevy.

While attending an archaeology conference in America, Lara finds herself uninterested in the speakers and decides to meet with Joslin Reyes and her friend Dana for combat training. Reyes informs Lara that Dana is going blind. Lara is shocked by Dana's failing vision not in any way hindering her combat prowess. Dana teaches Lara that she is using other techniques such as echolocation. She blindfolds Lara and tells her to focus on sound. Lara does and suddenly hears Samantha Nishimura's voice. Lara is shaken from this by Dana, and they finish their session. Returning to her hotel, Lara is greeted by a man named Todd Bellamy, who is there on behalf of Professor Robert Demur. Demur is interested in Lara's assistance in finding The Mushroom of Immortality. Lara politely refuses and goes to bed. That night a fire alarm is triggered, Lara makes her way out into the hall, through the evacuating crowd, Lara spots Todd propped in a doorway, dead. After speaking with the police, Lara decides to get in contact with Demur.

Lara and Jonah Maiava meet with Demur in a diner. Demur is panicky and distraught, Lara asks him what she wanted to see her about. He tells her about a fabled mushroom that bleeds black in China that was key to longer life. A colleague had emailed him a text he was translating regarding a formula to be used with the mushrooms. Demur had seen such mushrooms in China years prior with his wife, however he had not obtained samples. Lara goes with Demur to his office to find his notes on that expedition. At Demur's office they are accosted by a group of armed men who say that Lara and Demur will help them find the mushroom.

After defeating an army of zealots bent on finding the secrets of immortality, Lara now turns her attention back home and begins to work on stopping Trinity. However, when Lara gets word that Sam has escaped from Halberg Asylum, she drops everything to help her friend only to discover that Trinity has gotten involved and performed some sort of experiments on Sam in order to connect to the Divine Source. However, in doing so, they have somehow fully brought Himiko back as she has taken full control of Sam and is now making her way across Europe. She leaves a trail of destruction in her wake, gathering followers for her violent cause and embarks on a quest to fully possess Sam and destroy the world. As the Sun Goddess, Himiko consumes Sam’s mind. Lara desperately searches for a way to save her friend. She searches every where for an answer: from a university library to an underground séance. It’s a battle for Sam’s soul as Lara faces off against Himiko once and for all!

After learning from Ana that her father's apparent suicide was a cover up for his assassination, Lara begins hunting down Trinity in hopes of finding who ordered the death of her father. Jonah worries for Lara's well being and begs her to let go of her obsession to bring down Trinity. Lara spends several months travelling in order to try and live a normal life, however she eventually decides to visit a temple her father discovered once, however Trinity ambush her with the intent of finishing her once and for all.

Lara Croft takes the fight to the Trinity in Antarctica.