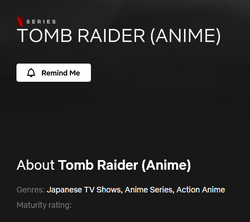 Tomb Raider is an upcoming anime series being produced by Legendary and published by Netflix[1]. It will be published in 2023.[2]

It was announced in January 2021 that an animated series was being produced, set in the Survivor Timeline, continuing the adventures of Lara Croft[3]. In June, Powerhouse Animation was announced as the animation studio for the series.[4] On May 28th, 2021, showrunner Tasha Huo announced on Twitter, that the writing of the series has ended.[5] On August 23rd, 2021, Huo stated on The Act Two Podcast that the first season would be 8 episodes long, at 22-minutes each.[6] On September 1st, 2021, Variety reported that the series was sold to Netflix with a two-season order, meaning that a second season was guaranteed, and likely produced at the same time as the first.[7] On a later episode which released on September 27, Huo's co-host stated that the series would be available on Netflix in 2023.[2]

On October 28th, 2021, along with the announcement that Jonah Maiava and Zip would be appearing in the anime series for the 25th Anniversary celebrations, Tasha Huo stated that the anime was part of the unification of the Survivor Timeline, Legend Timeline and Original Timeline, which Crystal Dynamics announced for the next steps of the franchise in early 2021. She also stated that the series would "explore Lara's life in ways we never get to in the games, but always wondered about."[8][9]

On September 13, 2021, Deadline reported that Hayley Atwell had been cast as Lara Croft in the series[10] Atwell stated on Instagram, "It has been a real pleasure recording this for Netflix and Legendary. Written and executive produced by the brilliant Tasha Huo." - indicating that she had already made some progress on the project.[11]

On October 28th, 2021, it was revealed during the 25th Anniversary celebrations for Tomb Raider that Earl Baylon would be returning to voice Jonah Maiava, and that Allen Maldonado had been cast as Zip.[12]