Timex-TMX is a watch Lara uses in Tomb Raider: Chronicles, it replaces the earlier iterations of Compass and Stopwatch from previous games. Timex-TMX was also used by Lara in the intro cinematic of the Von Croy Industries levels.

Ingame, the Timex-TMX can be used to find out Lara's statistics in the current level. Information such as time taken, distance travelled, healthpacks used, ammo used, and secrets found can be viewed. 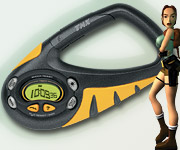