"The clock is the key, Lara."
―Richard Croft[src]

People of the Light

The Clock is an artifact from the first Lara Croft: Tomb Raider movie.

The clock is a key to opening the secret locations of the hidden halves of the Triangle of Light. It also contains a tiny speckle inside of itself, needed for the assembly of the two halves. Lastly it serves as a countdown clock for the planetary alignment.

The clock was found by Richard Croft, who hid it inside a regular clock, from the Illuminati group he was a member of. And then packed it into a hidden compartment in his mansion for Lara to find.

Lara found the clock when it started ticking during the first phase of the planetary alignment. She at first sought out her father's friend Wilson, who directed her to Manfred Powell. Powell then stole the clock from Lara and traveled to Tomb of the Dancing Light in Cambodia, when he intended to use the clock to release the first piece of the Triangle of Light. Lara caught up with Powell and convinced him to give her the clock, so she could use it on the right lock. Later Alex West, Powell's employee grabs the clock when the stone guardians are animated.

In Siberia, the former location of the City of Light, Powell and Lara Croft have joined forces to obtain the second half of the Triangle of Light. After retrieving the second half. Powell kills Alex West to force Lara to forge the two halves together. Lara throws the clock into a temporal flux, where it disassembles, revealing a speckle missing from the Triangle of Light. Lara joins the two halves together and uses it to save Alex, and then destroys the Triangle of Light. It's unknown what happened to the clock, after the cavern collapsed, was it joined back together or did it remain in pieces, either way it's buried deep underground. 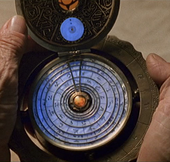 The Inside of the Clock

Alex West With The Clock

The Clock dismantled
Community content is available under CC-BY-SA unless otherwise noted.
Advertisement