The Submachine Guns also known as the Uzis are a recurring Weapon Type in the Tomb Raider series. They feature in every game in the series, sometimes with multiple variants.

The Uzis are a pair of small submachine guns, which fire at a rapid pace. They use the same 9mm ammunition as the Pistols and therefore have the same firepower, but their higher rate of fire makes for more damage. The Uzis can quickly kill endgame enemies like the Atlantean mutants and Xian guardians. Ammo is very plentiful in Tomb Raider I and II, but becomes much rarer in further installments. These weapons appear in various games of the series and have largely the same characteristics, with the exception of the Silver Mini SMGs in Tomb Raider: Anniversary, which have double the firepower and fire rate of the regular Mini SMGs and are only accessible via unlockable post-game cheats.

The name "Uzi" in the first three games is a misnomer, since they are actually based on the Ingram MAC-10. This model also appears in Anniversary as the Mini SMGs. In The Last Revelation and Chronicles, they are based on the IMI Micro Uzi; with the full-size Uzi used in Underworld, albeit with a different stock. The Mini SMGs in Anniversary each have a 25-round capacity (compared to the real MAC-10's 32 rounds) and a 40-round capacity in Underworld.

Deals 1 damage per shot and has a firing rate that is five times faster than the default pistols. Being dual-wielded by default doubles their fire rate making the Uzis one of the best guns of choice. 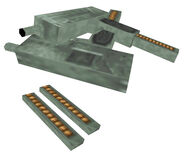 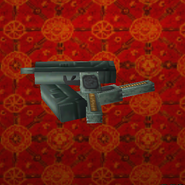 Two types of submachine gun appear in Tomb Raider III: the Uzis, making their return, and the MP5, based on the Heckler & Koch MP5 SD6 with an added scope. Unfortunately, the Uzis have much less ammo per pickup at a mere 40 rounds, greatly diminishing their use and forcing the player to conserve ammo whenever possible.

The MP5 functions identically to Tomb Raider II's M-16, but is an infinitely better gun. It deals 4 damage per shot at the same rate as the Uzis, with 60 rounds per pickup. The MP5 is especially useful to rapidly kill any enemy; the abundance of ammo throughout the game along with its increased firepower makes it a go-to means for making short work of enemies. However, like the M-16 from Tomb Raider II, Lara can only fire if she is running or standing still, making it very clunky and weildly, but can be very powerful and practical for more experienced players. 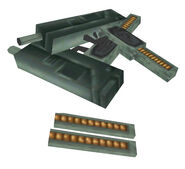 The Uzis in The Last Revelation and Chronicles have a different inventory model, this time resembling an IMI Micro Uzi. The ammo is further reduced to 30 rounds, making for much more conservation.

In Tomb Raider: Chronicles, the MP5 returns as the "HK Gun". It has had the moderator at the front removed, likely to more closely resemble an MP5k. The scope also becomes functional, like that of the revolver, and firing modes can be selected between single-shot, 5-round burst and fully-automatic fire.

Tomb Raider: The Angel of Darkness[]

Two models of submachine gun appear in Angel of Darkness. The MP5 returns as the "Mag Vega", with a long range to match. The PP-19 Bizon appears as the "Viper SMG", complete with a custom 70-round magazine and an integrated suppressor.

A variant of the MP5, the HK94A3 appears as the MG415 SMG in Tomb Raider: Legend. Although the magazine looks like the standard 30-round magazine found on the real SMG, it has a 40-round capacity in game, likely to balance it against the assault rifle, since it allows Lara to carry 160 rounds instead of the assault rifle's 150, making up for its shortfalls in accuracy and power.

The Mini SMGs serve as the replacement for the Uzis from the original game. They appear to be based on the Ingram MAC-10s. Have 25-round magazines with a maximum ammo capacity of 250 rounds.

They can be found in Egypt - Sanctuary of the Scion on top of the head of the sphinx. They are later reacquired after Kin Kade kills the Kid, in Natla's Mines, right before the final puzzle of the Level.

The IMI Uzi appears in Underworld as the "Autsi submachine gun". It has a different stock and charging handle. Always dual-wielded. A formidable weapon with a high rate of fire and moderate accuracy.

Depending on the difficulty of player tailoring setting, the player's starting ammo capacity varies between 160, 240 and 400 rounds, from least to most.

Guardian of Light has various types of SMG, including the Uzi as the Lightweight Machine Pistols, the MP5 as the Submachine Gun and its dual counterpart. Each have a high rate of fire and fire two shots at once in a wide spread.

Lara Croft and the Temple of Osiris[]

The Uzis return as the Machine Pistols, along with various other models, including the MP5k as the Submachine Gun and, like GoL, having a dual variant.

Dual SMGs are useful when you need to get as many bullets down range as fast as possible. Features a tap and hold shooting style.

Lara acquires a Japanese WWII Type 100 Submachine Gun, while in the Mountain base, while trying to get to the radio transmitter.

It has several available upgrades to increase stability, rate of fire and damage.

It is replaced by the Assault Rifle after the first set of rifle parts are found.

In Rise of the Tomb Raider, Lara can find the parts to build a submachine gun. Which can be equipped at any base camp. It is based on the Heckler and Koch MP7

Grenades - Weapon launched fragmentation grenades for use with the rifle's Grenade Launcher.

Laser Sight - Red dot sight that increases accuracy. Increase zoom factor plus aim pointer. Must be bought from the vendor.

During Tomb Raider III's development, the MP5 was initially identified as the "Heckler & Koch" within the inventory before it was renamed.