"Ah! Miss Croft! I take it you're ready to sign on."
―Sophia Leigh[src]

Sophia Leigh was a villainess in Tomb Raider III: Adventures of Lara Croft and its expansion The Lost Artifact.

It is not made clear how old Sophia is, but from the testimony of her employees, she is at least a century old. It is said that she may have purchased one of the four legendary meteorite artifacts called the "Eye of Isis" in the 1830s (possibly the one owned by sailor Stephen Barr). By the time Lara would have met her, she would have been over two hundred years old (though she appears to look the same age as Lara being in her late twenties to early thirties).

Her family background is not made clear, but from her cut-glass vowels and musical, laugh it is possible that she was born and raised British like Lara. When women were allowed the vote, Sophia came into her own. She may have founded her cosmetics company SL Incorporated soon after and along with various side-line products to keep generating capital may have continued her research into developing a mainstream formula for immortality that she gained from the artifact.

Lara Croft heads for London to find the Eye of Isis meteorite artifact. As she is exploring the roofs of the huge city she is attacked by one of Sophia's henchmen.

After a fierce battle in the bell tower, Lara demands to know who he is working for. He tells her that Sophia is his boss and knows nothing about her except that she has hired him to shoot people. While the man is being knocked out of the tower by the bell, Lara slides down the hole of the tower into an underground train station called Aldwych.

Afterwards, she falls through a giant hatch opening into the lair of mysterious looking people who call themselves The Damned and have their faces covered by metal masks.

She is taken to their leader Bob who explains that Sophia had tricked them into becoming lab rats for her experiments on immortality.

The effects of the experiments had made them faceless and given them immortality, but Sophia had used the best results on herself that gave her everlasting beauty and dumped them into the sewers and tube tunnels of London.

He agrees to help Lara if she will get him a bottle of Embalming Fluid from The Museum of Natural History. Lara agrees.

After retrieving the fluid for Bob and finding the route to get into Sophia's office, Lara finally meets the woman herself.

Sophia attempts to bribe Lara into joining her cosmetic company, but she refuses, telling her that she has seen her past experiments and doesn't want to be part of it.

She tries to take the Eye of Isis that is on Sophia's desk, but the evil woman grabs it and escapes. With her guns drawn, Lara goes after her.

Outside on the rooftops, Lara sees that her guns don't work on Sophia who shoots green bolts of energy at her.

After exploring several areas she spots a fuse box on the wall near where Sophia is standing. She shoots it and the villainess is electrified.

She collapses and explodes into an eerie green light leaving behind the artifact. Lara goes to the place where the artifact is, turns off the power and retrieves it.

Much later in Antarctica and upon reaching the Meteorite cavern, Lara hears numerous voices of those connected to the artifacts, including Sophia's prior to Willard's transformation.

Even though it seems that Sophia was killed, she seems to have survived, this time obtaining a fifth meteorite artifact called the "Hand of Rathmore". She confronts Lara again using the same attack from their last encounter except this time she was controlling the meteorite that floated in the air just like what Dr. Willard had done.

Fortunately Lara shot down the meteorite making Sophia vulnerable to her shooting.

She collapses for the second time and explodes into an eerie blue light again leaving behind the artifact. She is destroyed once and for all.

Again Lara goes to the area where the artifact is and retrieves it.

An earlier render of Sophia Leigh shows her with middle-length brunette hair, wearing gloves and red lipstick instead of the eventual pink. Sophia's trousers seem to be more tight too, perhaps as well as using other parts of Lara's model, Lara's legs were used in this model. 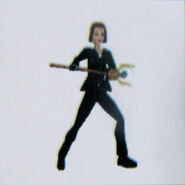 Sophia in her office

Sophia takes her staff from Lara 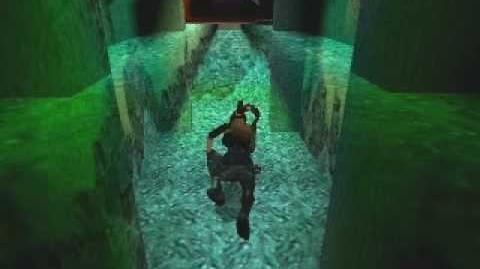