Shadow of the Tomb Raider: The Serpent's Heart

The Serpent's Heart is fifth DLC pack for Shadow of the Tomb Raider. This DLC will be released on March 5, 2019.

Lara Croft came to Hakan, while he was arguing with his sister-in-law about sending A'aron to a mission.

Lara offered to help find A'aron for Hakan. A'aron returned on his own, without the document he went after, but the stranger brought the document shortly after. Hakan, finally asked the stranger's name, and Lara revealed her name. Hakan told Lara that the document revealed a secret hideout of a cult, and Lara offered to join him. Hakan told her to meet him near the abandoned village on the outskirts. When Hakan reached the meeting point he was captured by the Cult. The cult offered Lara a deal, she would retrieve the Godslayer for them, and they would release Hakan. While Lara was getting the Godslayer, A'aron attacked the cult members to release Hakan. During the fight Hakan got injured and they ran. They manged to get over a bridge, when Lara caught up with them. Hakan and Lara then cut the bridge. Hakan's injuries were too great though, and he couldn't continue. He confessed his plan to use the Godslayer bow to challenge Amaru, and kill him. Because he couldn't forgive him for turning Atzi against her family and forcing Hakan to kill her for it. Knowing that he might not make it through his revenge plan, he had arranged Kayara to stay with Chasca. Hakan gave Lara the Godslayer, and made her promise to use it against Amaru if she had a chance. Hakan then passed away.

The collectibles of this DLC go under To Challenge a God artifact collections. During the completion of this DLC challenge tomb Slayer's Gauntlet, player is awarded with "Divine Bounty" skill, which allows Lara to loot more Gold Pieces from enemies. 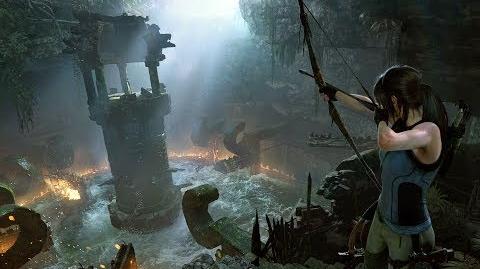 Shadow of the Tomb Raider - The Serpent's Heart NR
Español
Community content is available under CC-BY-SA unless otherwise noted.
Advertisement