Shadow of the Tomb Raider: The Price of Survival

The Price of Survival is the fourth DLC pack for Shadow of the Tomb Raider released in 12th February, 2019.

Q'orianka had stolen the cypher wheel of Amaru and planned on finding out what he was hiding. She enlisted the help of Lara Croft. The first cypher they found was "the sky road". Lara found as older man, who knew Amaru and Sayri as children and that they often traveled to a secret location hidden in the mountains. The man instructed Lara to start climbing as they were at the base of a mountain. After a hefty climb, Lara found buildings guarded by the Cult of Kukulkan. It was a tomb of Sayri, inscribed with a Latin message "I will never hesitate again", and with a key. Lara used the cypher again and found a message "Dancing water beside many trees". Lara visited the old man again and he told it to be a fancy name for the old irrigation system. After the trek through the irrigation system, Lara found a marginal amount of supplies that have spoiled over the years, and a box, that could be opened with the key found earlier. Inside there was a message from Amaru to Sayri. Lara proceeded further into an old village and found the training ground of Trinity. Lara found the reason why Amaru blames himself for Sayri's death: Amaru had prolonged his trial, but when the famine hit, he completed it as Trinity had promised to supply Paititi with food, but was too late, Sayri had already went on a hunt which killed him. Lara located Amaru, and gave his cypher wheel to a guard nearby with instructions of returning it to Amaru. Lara then returned to Q'orianka to inform of what she had found, and that she gave the cypher wheel back to Amaru.

The collectibles of this DLC go under Sibling Tragedy Artifact Collections. During the completion of this DLC Challenge tomb The Sixth Seal, player is awarded with Raptor's Eye skill that allows for a persistent target tracking when enemies are aimed at. This DLC also introduced a new hazard into the game in form of deadly red mushrooms, that must be avoided. 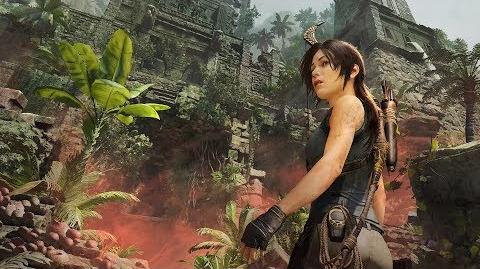 Shadow of the Tomb Raider - The Price of Survival NR
Español
Community content is available under CC-BY-SA unless otherwise noted.
Advertisement