Shadow of the Tomb Raider: The Forge

The Forge is the first DLC pack for Shadow of the Tomb Raider released in 13 Nov, 2018.

Lara Croft overhears Pilar and Vancho arguing about what to do. She inquires of what the argument was about. Pilar explains that she has an old map, meant for Abigaile Ortiz. Lara reveals that she knows Abby, and she and Jonah Maiava are staying with her in the town. Pilar starts to explain that the map was left behind by Abby's grandmother Mariana Ortiz, who had died a year ago due to cancer, with instructions of giving the map to Abby on an anniversary of her death. Pilar was conflicted if Abby is ready for it, and Lara told her that her grandmother thought that she was, and should be honored. Lara contacted Abby, and told she has a map for her, and Abby told her to meet in the community house. Apparently Diego who works there knows maps. Lara reached the community house first and met Diego. Diago recognized the map as his work, but noticed some markings that he didn't make. Lara determined them to be markings of lemon juice, a sort of invisible ink, when exposed to heat. Mariana had marked three spots around the town, after searching those locations they found three pieces of Chakana. Lara and Abby went to see Pilar to inquire if she knew anything about the map. Pilar told that it would lead to the magical, hidden place built by their ancestors. After assembling the Chakana, it pointed to one location, which Abby recognized a location where her grandmother took her to tell tales. Lara went to investigate and found an ancient forge. And on top of that forge an old tomb of Maya queen Abarrane. Abarrane was the first guardian of Kuwaq Yaku and she had constructed the forge to craft a powerful artifact. It turns out that Mariana was descendant of Abarrane. Pilar also confirmed that story, but was sworn to silent by Mariana. Now with the knowledge, Abigail was to become the new guardian of Kuwaq Yaku. Lara then left Abigail and Pilar to talk about things.

The mission can be played once player reaches Paititi. The collectibles of this DLC go under The Hidden Past Artifact Collections. During the completion of this DLC challenge tomb Forge of Destiny, player is awarded with Grenadier skill which allows the crafting of grenades.

The Forge also added a co-op or solo functionality to Shadow of the Tomb Raider. 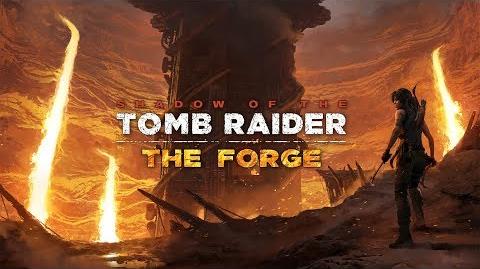