Sergei Mikhailov was the leader of a Russian mafia and the main antagonist of the Russian Submarine arc of Tomb Raider: Chronicles.

After formally serving as an agent for the KGB, Sergei became a ruthless mafioso leader with an insatiable thirst for power. His ambition was so great that it led him on the search for the Spear of Destiny, the most powerful artefact in Christendom. By 1998, his quest had brought him to the Russian sea, where a Kriegsmarine U-Boat transporting the artefact had sunk under mysterious circumstances during World War II.

In order to retrieve the Spear, Sergei bribed Admiral Igor Yarofev of the Russian navy to use his submarine to ferry the mafioso and his henchmen to the bottom of the ocean, taking advantage of their desperate need for work after the collapse of the Soviet Union. Though vexed by Sergei's condescending, arrogant attitude and his refusal to divulge what they were looking for, Yarofev accepted the bribe and brought the criminals on board the sub. Residing in the bridge during their descent and subsequent search of the seabed, Sergei was informed that a female stowaway had been caught and was currently being held in the brig. Angered by the admiral's refusal to immediately kill the woman, Sergei decided to deal with the intruder himself, unaware that the intruder, Lara Croft, had already escaped and was watching from an air vent. Lara would eventually acquire a deep-sea diving suit, locate the remains of the U-Boat, and retrieve the Spear herself.

When Lara returned to the submarine with the artefact, which by the present day had been reduced to a spear head, Sergei and his henchmen were there to confront her. Ignoring Lara's warning that he would regret trying to harness something so powerful, Sergei forced her to relinquish the spear head, before ordering his men to take her to the torpedo room and eject her into the ocean. With the Spear in his possession at last, Sergei admired his prize as Lara was being escorted from the room, desperately insisting that it was too powerful and dangerous and that he had no idea what he was dealing with. Her fears were proven right when the Spear suddenly seized Sergei in a crimson red aura. As Lara and his henchmen watched in horror, he screamed in agony before being destroyed in an explosion that scuttled the submarine. Lara would become the only survivor of the incident, and Sergei's demise would serve as a lesson to the adventurer that some artefacts were best left to their slumber.

Sergei was characterized not only by his ruthlessness, but his arrogance and thirst for power. There were implications that his ultimate goal was world domination, hence his search for the powerful Spear of Destiny. In the end his arrogant and ambitious nature would be his undoing, as he fell victim to the Spear's volatile nature when he ignored the more cautious Lara's warnings until it was too late. 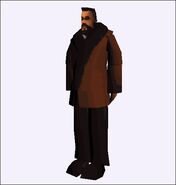