Start a Wiki
watch 01:20
'Tomb Rider' Profile: Richard Croft Survivor Timeline
Do you like this video?

Lord Richard James Croft, Ph.D, is a British aristocrat dedicated to archeology, besides being the late father of Lara Croft, and husband of her late mother.

Unlike the previous version of this character, he is portrayed as having been absent for much of Lara's childhood, and having been somewhat neglectful of her in pursuit of his research. However he gave her gifts from his finds, which though appreciative of them at the time, she later saw them as bribes.

Lara ended up resenting her father and dismissing his theories as fantasy, much like the rest of the professional archaeological community. However after witnessing evidence of an immortal soul, Lara gathered his unfinished research in order to finish it, and finally come to peace with her father's memory.

He was voiced by Jon Voight, who also played Principal Dimly in Bratz,

Richard Croft was born into the wealthy Croft family; as he held the title of "Lord", his father was either a Duke or Marquess[3]. He studied archaeology at Oxford University, travelling extensively to further his research, eventually earning his Ph.D and publishing several books. He was quite successful but his theories often attracted ridicule from detractors.

While researching at the library, he met Amelia de Mornay, he was enthralled by her quick wit and Amelia was betrothed to the Earl of Farringdon, though she had no interest in pursuing the relationship, breaking it off to be with Richard. When he met Amelia's parents and brother, Atlas, they treated him with thinly veiled contempt, though Richard took their dislike calmly for the sake of Amelia.

The two were later married, with the marriage resulting in the birth of a daughter, Lara. Croft was overjoyed after the birth of his daughter, as it is implied her birth was difficult. He returned home to celebrate making himself steak and drinking whiskey, before falling asleep with the cat.

At some point, Richard met Conrad Roth, a freelance treasure hunter. Croft was impressed by Roth's skill, and his willingness to bend certain laws for the purposes of his work, Croft then befriended and hired Roth, as a guide and bodyguard. Roth attempted to teach Croft to shoot, however these lessons were abandoned after Croft showed no progress.

Over the next several years, Croft saw great success in his career, publishing several books. However tragedy struck the Croft family as his beloved wife's plane crashed in Tibet. He ventured out with the assistance of Roth. Croft found the crash site, and with it, Amelia's body, with her were several hand written letters from her, to him and Lara.

Croft was devastated by the loss of his wife, and began researching rituals for resurrection. Roth begged him not to go through with it fearing how Croft might act if it didn't work, however he didn't listen and performed the ritual to no avail. Defeated, Croft had Amelia interred in the Croft Family Crypt, in an elaborate sarcophagus. He felt a strange sense of ease having laid her to rest.

Croft never announced that he found her body to anyone, so she was presumed missing. This led to Atlas becoming even more resentful of his brother-in-law. After losing Amelia, Richard began to search for the key to eternal life.

He traveled to Mexico to further his research. In need of a guide, he was pointed to Leticia Cortez. Who supposedly knew the area better than anyone. He found her with others protesting the draining of the wetlands. Croft paid for the draining to be ceased. He asked for her assistance, which she gladly offered in return for his help. Croft told Leticia all about his work, and his daughter back home. They had a brief romantic relationship, which ended when he returned home.

He met a young woman named Ana at a conference on archaeology and anthropology. He was intrigued by her, his intrigue later turning to infatuation. The two started a romance, which was quite serious. Under advice from Winston, his butler, he introduced her to Lara, hoping she would be a positive influence on her.

Croft began to look into a myth about something called the Divine Source, and the Deathless Prophet, who had allegedly used it's power to beat death. Croft began investigating further, believing that the prophet had been laid to rest in a tomb, which he believed to be in Syria.

During this time Croft's research lead to his reputation being ruined and he became a laughing stock among his peers. He believed others simply didn't understand or were scared of what he was researching. Croft began to suspect he was being deliberately sabotaged professionally. To hide his research, he constructed a secret lab beneath his home. Roth believed he was simply paranoid, however he still helped his friend however he could. Croft continued his research, and found proof that he was being watched, by a group he eventually learned the name of, Trinity.

Croft began leaving documents and tapes for Lara, who had became increasingly frustrated with her father and his work. Lara voiced her worry to him, though he told her he was doing important work, Lara said she didn't care about his work and wanted him to be her dad again before storming off, this would be the last time he ever spoke to his daughter.

Fearing that Croft may end up being able to expose them, Trinity ordered Croft's death. Ana, who was secretly a Trinity spy, was given the order to kill Croft, however she couldn't bring herself to kill him. Another agent was selected, and killed Croft, staging his death to look like a suicide. His body was found by a young Lara.

Lara began attempting to distance herself from her father's memory. She refused to use her inheritance, and never returned to the manor. Several years later, Lara having witnessed evidence of an immortal soul, realized her father was right. After publishing her account of what happened on Yamatai, she was discredited by Trinity in a similar manner to her father. Lara retrieved her father's research on the Divine Source and the Deathless Prophet, she discovered the location of the Prophet's tomb in Syria, discovering it empty and being surrounded by Trinity, Lara was forced to destroy the tomb in order to escape, using Trinity's own set charges. Lara however found a clue that gave her a fresh lead, a symbol of a cross, Lara returned home, to do more research.

At this time, Lara was sent an eviction notice from her uncle Atlas. Lara searched the house hoping to find her father's will to prove her ownership, however she instead found many of her father's notes that pointed to a secret lab. Lara discovered that her father had in fact claimed her mother and brought her home, interring her in the family crypt. Lara had the grave verified so she could nullify her uncle's claims for the manor.

Lara resumed her research to find which lead her to the myth of Kitezh. Trinity stole her lead, and Lara was thrust into a race to find the lost city. Lara headed to Siberia in order to find the Divine Source.

Lara was captured, and learned that Ana was a spy for Trinity all along. Lara befriended the local people, who were the descendants of the prophet. Lara discovered the location of the city and the resting place of the Divine Source, proving once and for all that her father was right. However, Lara was forced to Destroy the Divine Source to stop Trinity from claiming it.

Lara realized that she couldn't save her father from the choices he had made, and that she instead must forge her own path. However, she no longer resented her father, and was dedicated to restoring her family's good name.

Croft met Amelia in a Library at Oxford, while researching. The two hit it off, leading to Amelia breaking off her arranged marriage to the Earl of Farringdon. Croft was loathed by Amelia's family, however, she loved him too deeply to care, about what her family wanted. Croft even cleared out a room in his manor just so Amelia would have somewhere suitable to do her painting. Their brief marriage resulted in a daughter, Lara. Amelia's death was the catalyst that triggered his obsession with immortality.

Lord Croft loved his daughter more than anything, however his obsessive nature lead him to being quite neglectful of her. However he took an active role in planning her birthday party with a scavenger hunt, and brought her gifts from his finds, though Lara would eventually come to see these gifts as bribes. His last conversation with his daughter was a fight, which he never got to apologise for as he was murdered shortly thereafter, his body being discovered by Lara who was 11 at the time.

Lara's posthumous relationship with her father was very strained. She came to view him as crazy, much like the rest of the archaeological community. As a result, Lara refused to attend Oxford University, not wanting to be seen as coasting off her family's name.

After surviving Yamatai, Lara realized there was so much her father was right about, and decided to try and finish his work in order to honour his memory.

While researching immortality, Croft came across an environmental group, who were protesting the draining of the wetlands. Croft met with one of their group, a young woman, Leticia, telling her he needed a guide, and that she was suggested to him. She turned him down, as she needed to help protect the wetlands. Croft paid to make arrangements for the draining to be ceased. Leticia acted as Croft's guide, taking him to ruins within the wetlands. They had a brief romance, which ended when he returned home.

After a speaking engagement at a conference on archaeology and anthropology, he was approached by a woman named Ana. She was intrigued by his work. Ana became a mother figure to Lara, who didn't have any female role models since her mother's death.

Croft initially hired Roth due to his willingness to bend the law. The two forged a long lasting business relationship and friendship. Roth consoled Croft after the death of his wife, and even begged him to not go through with his attempt to resurrect her.

Lord Croft trusted Roth completely, making him Lara's legal guardian in the event of his death. The last time Croft spoke to Roth he asked him to look after Lara.

Roth admired Croft's willingness to trust his instincts no matter what, a trait Roth urged Lara to follow. 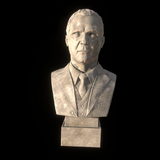 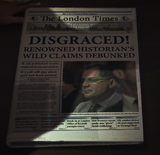 Better view of Newspaper from The Nightmare

Richard's Gravestone
Add a photo to this gallery

Retrieved from "https://tombraider.fandom.com/wiki/Richard_Croft_(Survivor_Timeline)?oldid=55222"
Community content is available under CC-BY-SA unless otherwise noted.