Melissa Croft was a working concept in Core Design's version of Tomb Raider: 10th Anniversary Edition which was canceled. Melissa was supposed to be playable in a cooperative multiplayer mode, where the second player could control Melissa. After the player has completed the game once, they then would also have an option to play as Melissa in single-player mode. [1]

While Lara was born into greatness there are those of her family with a less salubrious upbringing, and Melissa Carter is certainly one of the poor relations. A blood relative through Lara's mother's side. Melissa has a great deal in common with her more advantaged cousin; she's well educated, intelligent, athletic, and beautiful but there are ways in which the two of them could not be less alike.

Lara's wealth keeps her in a manner to which she's become accustomed, and which now frankly holds little importance in her life, Melissa has not had the same benefits. She's a resourceful girl however, and has certainly made the best of her talents, though few would guess how. Melissa's desire to obtain precious items and artefacts mirrors that of Lara, but Melissa has far less scruples as to how she attains them. In the past she has used her womanly wiles to gain what she needs. She has perpetrated countless scams and cons to get what she wants, but by far her most direct and successful avenue of acquisition is theft. Melissa's natural guile and athleticism coupled with her sharp mind give her the attributed of world-class cat burglar and they certainly have served her well.

She has in the past looked enviously on Croft Manor and wondered what price might lie on the many beautiful and rare things within. In recent months she has wondered how Lara gets her hands on these treasures, and she's determined to find out.[2] 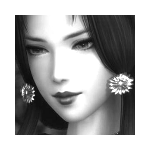