For other character of the same name see, See Mathias (Disambiguation)

Leader of the Solarii Brotherhood

Crew of the Endurance
Scavenger

"Do you think you're the hero, Lara? Everything I've done, I've done to survive! How many lives have you taken to do the same? There are no heroes here; only survivors!"
―Mathias[src]

Mathias, also referred to as Father Mathias, is the secondary antagonist[1] in Tomb Raider and an inhabitant of the Yamatai island.

Mathias became stranded on the island of Yamatai in 1982 when his plane crashed into the waters near the lost island kingdom of Yamatai, located in the Dragon's Triangle.

Mathias and his fellow survivors attempted to make a boat to escape the island. However a freak storm destroyed the craft, killing several of them. Mathias became convinced that the storms were aware of their attempts to escape and decided against trying to leave with his groups second escape attempt, watching from the shore as another storm killed the remainder of his fellow survivors. Mathias set about uncovering the secrets of the storm.[2]

He discovered a lost Japanese civilization based around the shamanistic Sun Queen, Himiko.[3] Keeping to himself and avoiding anyone else on the island and killing any who got in his way, Mathias began studying the island.[4] He discovered that the stranded souls were not the only inhabitants of the island, and there was in fact an army of Samurai Warriors guarding a monastery.[5]

At some point, Himiko began speaking to Mathias, telling him that she was trapped in a decaying body. She ordered him to bring her a new vessel, in exchange for which, she would allow him to leave the island. [6]

Mathias decided it was time to reveal himself to the other inhabitants of the island. He adorned himself in a makeshift robe and presented himself as a priest of Himiko, telling them they had been chosen to serve the Sun Queen. Desperate for any hope of escape many joined Mathias, those who didn't were slaughtered.[7]

Over the years the Solarii continued to follow Mathias, though not as obediently as he may have thought. Several members began to see Mathias' words as nothing more than delusion and grew tired of following him, planning a mutiny.[9]

Arrival of the Endurance[]

In 2013, the salvage ship Endurance entered the Dragon's Triangle with an expedition searching for Yamatai. A violent storm split the Endurance in two and beached the vessel. Mathias located one of the survivors, Samantha Nishimura. He presented himself as a fellow survivor, offering her medical assistance for her sprained foot. Thankful for his help, Sam struck up conversation with Mathias, telling her about the legend of Himiko, and how her family apparently descended from Yamatai. Mathias realized that he may have finally found the way off the island. Sam manages to get into radio contact with some of the rest of her crew and directed them to her location. Suddenly, Lara Croft arrived at the same campsite, Lara eventually passed out, and Mathias took the opportunity to take Sam. He later sent Solarii to the area in order to round up Lara and other Survivors. [10]

Mathias has Sam taken to the palace at the base of the Mountain before making his way to the monastery in order to make preparations. His men bring him Dr James Whitman, who passes himself off as not a threat. Mathias sees that Whitman could be useful and orders he not be harmed. Lara arrives at the Monastery, and he orders his men to kill her however the arrival of the Stormguard causes Mathias to flee.

He returns to the Palace and is informed that the other members of the Endurance have been rounded up, though one of them had managed to escape. He orders the rest of them be kept in a suspended cage with multiple guards. He has Sam taken to the caves below to perform the fire ritual. Lara interrupts but is unable to stop the ritual for long, and the pyre Sam is on is set alight. However a sudden gust of wind douses the flames and Sam is saved. Overjoyed, Mathias has Sam cut down and taken back up to the palace and orders Lara be disposed of.

Mathias makes his way to Sam but a series of explosions set the palace ablaze. Reaching Sam, he tries to convince her that being the vessel for Himiko will be a great honor. He leaves a sentry to guard Sam as he tries to see if there's anything that can be done to stop the spread of fire. However, he bumps into Whitman who tells him that Lara is trying to free Sam.

He sends his men to kill Lara and recapture Sam but to no avail as Sam and Lara both manage to escape separately. He later spots Lara trying to escape over the bridge and orders it to be destroyed in order kill her, killing one of his own men to further the point that he will not tolerate naysayers. Lara manages to survive the encounter and reach a helicopter, which is soon destroyed by Himiko's storms.

Mathias heads to the crash site along with a band of his men. A man with Lara, Roth, fends off the Solarii with his pistol while carrying Lara. Mathias hurls a hatchet hoping to kill Lara, However Roth takes the blow, killing him, though not before he returns fire, wounding Mathias who quickly flees.

With Sam now back with the remaining crew of the Endurance, Mathias concocts a plan to get her back. He sends Whitman under the guise of having outlived his usefulness, however, Lara doesn't trust him and almost starts a fight. That night, while Lara is gone. The Solarii attack, Whitman takes his cue and takes Sam back to Mathias.

Mathias takes Sam and Whitman to the monastery, where two Stormguard stand watch. He plays on Whitman's ego, telling him that the Stormguard are merely waiting to be introduced to their new Queen. However when attempting to converse with them, Whitman is slaughtered by the Stormguard, which Mathias uses as a distraction to run past them to get inside, The wind picks up and destroys the bridge.

Mathias makes his way through the monastery with Sam in tow, ascending to the Ritual chamber. They are swiftly followed by Lara, who threatens Mathias, though a sudden bolt of lightning disorients Lara long enough for Mathias to escape.

Atop the monastery, Mathias begins the ritual to transfer Himiko's soul into Sam's body, but Lara arrives and fights her way through the remnants of the Solarii as well as the Stormguard. As she attempts to stop the ritual, Mathias shoots her bow from her hands and attacks her. Lara defends herself, wounding Mathias in the shoulder with a shot from his own discarded pistol. Mathias is then shot several times by Lara, who is dual-wielding pistols, and falls from the ritual platform to his death in the chasm below.[10]

Mathias seemed to be a kind man as he helped Sam with her foot and cared for her well being. However he was in reality an insane and disturbed man due to being trapped on the island of Yamatai for so long. In spite of that he was intelligent as he knew the storms that surrounded the island weren't natural and knew something was keeping him on the island. While leading his cult he was able to sway them with his charisma and knowledge of the island but once they started to question him or when people refused to join him he became ruthless to show them that his authority was the only one that they needed. He was also callous to the lives of others as he sacrificed his own crew to see if his theory about the storms was true even his own followers weren't safe from his callousness as he gladly sacrificed them if it meant he would get closer to his goals. He soon became delusional believing Himiko was talking to him in his sleep demanding a vessel in exchange for freedom and believing he could rule the world with her even though their was evidence that was never going to happen and releasing Himiko on the world would be too great of a risk. Deep down though it was implied he wasn't proud of the choices he made but believed them to be necessary justifying everything he has done was to survive and that their were no heroes only survivors. 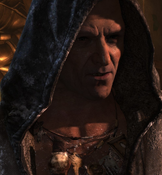