Lux Veritatis (Light of Truth) is a secret 12th century Order of warrior monks who hid the Obscura Paintings in the 1400's. Lux Veritatis dedicating itself fighting The Cabal[1]. They created several weapons from a meteorite iron, they were tuned to the wavelengths of the members of Lux Veritatis, so only they and their descendants could use them. Those weapons were: Chirugai, Irenfolm, Irenscyld, Culcrys, and Baetyl[2].

Konstantin Heistuurm was member of this group, and was trusted with two of the Periapt Shards. Konstantin tried to raise his son Kurtis to be member of the order, but Kurtis left. That action saved Kurtis' life, since years later Pieter Van Eckhardt killed every member of the Lux Veritatis.

Mathias Vasiley was also once a member of Lux Veritatis, but he left the order at the end of World War II. He used his training to disappear from the order, and their enemy The Cabal, he had a daughter Morgau Vasiley, to whom he taught in the ways of Lux Veritatis, so she would have the skills to avoid them as well[2]. After the Lux Veritatis were slaughtered, Mathias started using the order's logo on his business card.[3] 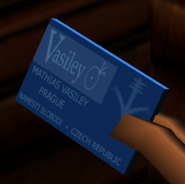 Mathias Vasiley's business card
Add a photo to this gallery

Retrieved from "https://tombraider.fandom.com/wiki/Lux_Veritatis?oldid=56412"
Community content is available under CC-BY-SA unless otherwise noted.