When Tomb Raider was initially being developed, the game was set to star a character reminiscent of a mustachioed Indiana Jones, right down to attire. During development, the character was scrapped and new character was created.

The original redesign lead to a South American Mercenary named, Laura Cruz, inspired by Swedish singer, Neneh Cherry and comic book heroine, Tank Girl. Core Design later decided to rename her to Lara and make her a hometown hero, and changed Lara's origin to England. Going through the phone book to find a name that sounded similar to the name they had, the found the name "Lara Croft" and renamed their character, as well as giving her an upper class upbringing.

Lara's popularity lead to her being adapted to other forms of media as well as being used used in advertising for products such as Lucozade, a brand of energy drink, Seat cars and even a line of chocolate bars.

Lara garnered status as a sex symbol of gaming, leading to her being portrayed by various models for photo shoots. However this has lead to some backlash from feminist groups who took issue with Lara's sex appeal being used for marketing purposes, as well as by parental groups who objected to sexual content in video games.

In 2009 a ring road in Derby was named "Lara Croft Way" after the local council opened a vote to the public to decide the road's name. Lara Croft Way won the public vote with landslide 89% of overall votes numbering over 27,000.

Lara's classic attire of a tank top, shorts and combat boots has become a recurring garb of female explorers within the genre, similar to how more classic movie heroes would wear a fedora and leather jacket, which is notably worn by the characters, David Jones in China, Fred C. Dobbs in The Treasure of the Sierra Madre, Harry Steele in The Secret of the Incas or Indiana Jones from the franchise of the same name.

The Evolution of Lara Croft

20th anniversary pictorial
Add a photo to this gallery 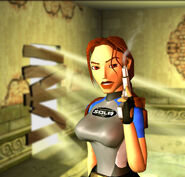 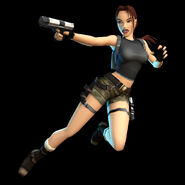 Lara in Tomb Raider: The Angel of Darkness
(2003)
Add a photo to this gallery

Lara in Tomb Raider: Underworld
(2009)
Add a photo to this gallery

Retrieved from "https://tombraider.fandom.com/wiki/Lara_Croft?oldid=54707"
Community content is available under CC-BY-SA unless otherwise noted.