Mathias
Crew of The Endurance (former)
Himself

Crew of the Endurance

James Whitman, Ph. D is an American archeologist/anthropologist and television personality. With his show being canceled and his failing marriage, Whitman joins the Endurance in a last effort to try and salvage his career and fortune.

He is the tertiary antagonist in Tomb Raider.

Dr. Whitman studied at Harvard and at Cambridge University, he has 30 years of field experience and two PhDs, one of which is in East Asian history, he is an expert in Archaeology and Anthropology. He has also taught at many schools around the world.

Whitman later married a woman named Sheila, though this marriage ended in divorce after it was discovered that he had at least one affair with a younger woman.

Whitman's career made the transition from teaching to presenting television, having his own TV documentary/archaeology series, called "Whitman's World". Boosting his popularity, and making him quite wealthy. He also wrote a range of tie-in books.

His show was commissioned for a third season, as the ratings seemed to be decent enough for the network to continue to invest in the show. He commissioned Conrad Roth and the Endurance, as the vessel for the new season. Roth, however, insisted he choose his own crew, which included Lara Croft.

Whitman went to the Endurance with the intent of meeting the crew. Who he believed would make for great television. His agent called him with the final figures for season 2 of his show came in, which were much worse than expected. The network pulled his funding. leading him to attempt to raise the money himself. However this merely led to more trouble, with Whitman almost being killed, only to be rescued by Jonah, the cook of the Endurance, who Roth sent to keep an eye on him.

Returning to the Endurance, Whitman admitted to being cancelled.

Several more attempts to raise the necessary funding were made, but the didn't pan out, and it seemed as though the voyage wouldn't go through. However hope came in the form of an investment from the uncle of Samantha Nishimura, Lara's best friend. She insisted however she be allowed to be the director of the newly planned documentary. And the expedition was underway.

Whitman's condescending and self-centered attitude earned him the dislike of the rest of the crew, including Lara, who up until that point had been an admirer of his. One day, while the crew was trying to decide where to look for Yamatai, Lara proposed they head east into the Dragon's Triangle. Unwilling to risk his reputation on her 'hunch', Whitman refused to listen to Lara's theories, arguing that the books did not support Yamatai being that far east. Though he was the lead archeologist, no-one else was willing to side with him, and Roth eventually decided that they would head east. Whitman would later reveal in his letter to his wife that he planned to steal all the credit for the discovery should they indeed find Yamatai in the Dragon's Triangle. He was unaware that Sam suspected that he may try to claim Lara's discovery as his own, so shot footage of her in secret to ensure she got the credit she deserved.

As the ship headed into the Dragon's Triangle, Whitman and Jonah partook in a filler shoot in which they would demonstrate how to gut a fish. During filming, Whitman dropped the fish accidentally and stormed off in a ridiculous display of temper. Though frustrated, Sam brought him back and reminded him that they needed the footage to satisfy the audience's need for content. Though reluctant, Whitman understood and the filler shoot was completed.

That night, a powerful storm tore the endurance in two, though Whitman managed to escape with the rest of the crew on a lifeboat. At the start of the game, when the survivors are gathered on the beach, he can be seen claiming that he knew [the wreck] would happen.

Whitman isn't seen again until he and the crew reunite with Lara in the coastal forest. Lara's leg is slightly injured from a rusty bear trap, so Whitman is left to stay with her while the crew searches for Sam, who had at that point been kidnapped by Mathias. After dropping Lara off at a campfire to recover, Whitman goes off to explore their surroundings, and eventually discovers an ancient door covered in markings which he finds fascinating. Whitman and Lara manage to open the door, but while exploring the other side are suddenly ambushed by the islanders. Though he has a pistol, Whitman surrenders, allowing himself and Lara to be captured. It is unclear whether he did so because of his interest in the islanders' cult behavior, or he knew that they would be killed if they tried to fight back.

Because he willingly surrendered, instead of being placed with the other captives Whitman is taken to the cult's headquarters inside the Sun Queen's palace. Once he had convinced the islanders and Mathias that he was no threat, they allow him to move around freely, enabling him to learn more about the cult. The more Whitman learned, the more fascinated he became, and at some point decided to try and gain Mathias's trust, assuming that he couldn't possibly believe the things he preached to his followers. When Lara encounters him in the palace corridor, he explains what he had been doing, though Lara is more interested in finding Sam. Whitman refuses to come with her, instead suggesting that he keep a look out. Having no reason to be suspicious, Lara agrees and leaves to save Sam. However, when she returns with Sam, Whitman is nowhere to be found, and is soon discovered to have apparently been captured by Mathias and his men. Whitman tells them to run, and Lara and Sam flee. They eventually escape the burning palace along with the rest of the crew, with no knowledge of what became of Whitman.

However, while they were camping at the beach, Whitman suddenly appears sprinting towards them, yelling for help. Though he claims that he had been fleeing from the cultists for some time, Lara notes that he doesn't have a bead of sweat on him. Though Lara voices her suspicions, the other crew members believe that they have no reason to distrust him, forcing her to back down for now. Whitman spends the remainder of the day watching over Sam while Jonah keeps a look out for cultists and Reyes repairs the boat they found on the beach. Though Whitman appeared to be no threat, in truth he had indeed allied with Mathias with the intention of learning more of the ritual the cult had planned for Sam, and with Lara not trusting him he had to act quickly. When Lara departed to explore an abandoned research base, Whitman seized his chance. During a sudden attack by cultists, possibly planned between Mathias and Whitman beforehand, the crew members could do nothing but watch as Whitman took Sam and disappeared. When Lara returns and learns what had happened, she correctly guesses that Whitman had taken her back to Mathias.

As Lara discovers in a letter found near in the monastery, Whitman knew that he had crossed the line in kidnapping Sam, and so to protect his image he plots to ensure that Lara and the other survivors would not make it off the island. At that point he also realizes that Mathias and his Solarii could not be reasoned with after all, and decides to slip away and wait for rescue once the ritual is completed. Once he is rescued as the 'perfect sole survivor' and returns with the authorities and cameras, he would finally regain his lost fame and fortune.

However, he would never get the chance to carry out his plans, for Mathias needed someone to distract the Stormguard warriors guarding the entrance to the Monastery. As Lara watches from a ledge, Whitman and Mathias lead a captive Sam to the entrance. They are stopped, however, by the presence of two Stormguard warriors at the foot of the bridge. Mathias plays on Whitman's ego and convinces him to approach the Oni to declare "the arrival of their new Queen". Mistaking the Stormguard for a primitive archaic tribe like those he had encountered before, and too blinded by greed and overconfidence to realize the danger he was putting himself in, Whitman did as he was told. The Oni are provoked into attacking Whitman after he says Joō (女王, meaning "queen"), brutally slaughtering him as Mathias and Sam slip past them and across the bridge into the Monastery.

Whitman is arrogant and self-centered and is only interested in furthering his own interests, Lara later finds a letter expressing that Whitman is beginning to grow more obsessed with his fame, and shows that he sees this whole situation as a boon for his career. He shows little to no remorse towards the death of the other crew members of the Endurance, saying that their deaths help add to the "drama" of the situation.

Later, Whitman betrays Lara and the remaining crew by capturing Sam for Mathias. He shows no signs of regret as he rants about helping Mathias kill Sam, and says that once it is all finished, he will need to slip away and wait for rescue. The final part of the letter makes it clear just how self-conceited Whitman is, as he reminds himself to "show an appropriately convincing expression of sorrow" to the media and authorities while taking full credit for the discoveries found on Yamatai, as he plans on being the "sole survivor". Lara felt no sympathy for his demise, and when she discovered his final letter, she deemed him a foolish man who in the end had let his ambition get the better of him.

Whitman has been shown to be very protective of the value of artifacts in his collection, when his ex-wife began selling his antiquities to gain the money from their divorce settlement, he attempted to bargain with her for the sale of his antiques to get more value from them as he knew what they were worth.

Whitman was also seen to be lecherous, as he cheated on his wife with a 22 year old (he also didn't seem in any way remorseful about it, as he merely corrected his wife as to the woman's age as opposed to apologizing.) Also while examining Lara's crew file, he states that "she's someone [he] wouldn't mind getting lost with." 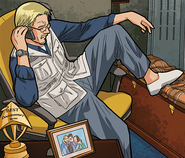 Photo with Sheila and two children.