For Himiko in other continuities, see here.

Himiko (卑弥呼) was the first and last absolute monarch of the ancient island nation of Yamatai and the main focus of the series of in-game collectible documents known as the Ancient Scrolls. She is the primary antagonist[1] of Tomb Raider alongside Mathias, whom she is manipulating to do her bidding. She returns as the Primary antagonist in the second run of Dark Horse's Tomb Raider Comics, where she attempts to return to Yamatai and reclaim her throne.

She is described as the beautiful, yet inscrutable, enigmatic, ruthless Sun Queen who ruled Yamatai thousands of years ago with the support of her Stormguard. She surrounded herself with a cadre of priestesses, known as the Priestesses of the Sun. No men attended to her, except for the general of the Stormguard. She was believed to be able to communicate with the spirit world and to control the elements. She was worshiped by some of her subjects of the island. Her subjects were not unhappy; under her rule, agricultural production was consistently high, and thus no one went hungry, her taxes were reasonable, and her Stormguard fiercely protected the nation from any foreign threats. Her life ostensibly spanned 72 years, from c.170 AD to c.248 AD. However, Himiko was actually the only monarch to ever rule Yamatai, and her lifespan actually lasted hundreds of years.

The secret behind her apparent immortality was a dark and sinister ritual. As she grew elderly, she would choose one of her priestesses as her successor. The priestess, who was given the title of Daughter of the Sun, would be trained in languages, warfare, and all of the other necessary skills of a monarch. This was considered an unparalleled honor among the people. At a time of her choosing, Himiko would conduct a ceremony which would transfer her power to the priestess, making her the new Sun Queen. But the reality was very different. In a secret ritual, Himiko actually transferred her soul, not her power, into the young woman, destroying the priestess' soul and permanently taking over her body. In this way, she continued her life and rule. No one apart from the General of her Stormguard knew the true nature of the "succession", since he alone was tasked with escorting the priestess to the Chamber of the Sun, where Himiko waited alone to perform the ritual.

Trapped in a Decaying Body[]

Himiko performed this practice countless times, effectively becoming immortal through the de facto periodic murder of one of her priestesses and the taking over of the young woman's body as her own. Finally however, it ended when, at some point during the Kamakura period (c. 1185-1333 CE), one chosen Daughter of the Sun, a priestess named Hoshi, discovered the truth. Horrified and realizing Himiko's evil, she resolved to end her life, which would deny Himiko her chosen body, thus foiling her plan and saving future priestesses from suffering the same fate. Using the Stormguard General's stolen dagger, she committed suicide on the verge of the transference.[2]

The corruption of the ritual left Himiko trapped in her decaying body, unable to die, yet not alive. Her rage at this manifested in a curse on the entire island, destroying the nation and its citizens. Her Stormguard became undead Oni, fiercely protecting her decaying form for all eternity. Furthermore, the curse also caused unnatural weather to cover the island, such as clear skies in one area and snow in another. Most sinister of all, Himiko's consciousness manifested itself in constantly stormy weather surrounding the island. These storms were unnatural, driven by her rage and consciousness, and would actually vary in intensity, to deliberately cause any and all ships and aircraft that ventured near the island to be wrecked or crash on it. Any survivors were kept from leaving by the same storms, which would either kill them or force them to abandon their attempts to leave. The only way to break the curse was one of two things: either complete the ritual to transfer Himiko's soul to a new, worthy vessel or destroy her current, decaying one.

In 1982, a group of mercenaries arrived on the island when their aircraft crashed after being ensnared by Himiko's storms. They tried numerous times to escape, however all attempts failed. Their leader, Mathias, sensed the malevolent presence in the storms. He did not join the men in their final escape attempt, instead watching on the shore as they were all killed, leaving him alone.[3]

Wanting to unlock the power behind the storms, he searched the island for clues, discovering pieces of the truth, while avoiding any other survivors that came to the island and ruthlessly dispatching any of them who got in his way. But he soon found that he needed help. He therefore began recruiting other survivors to his cause, forming them into a band of cultists devoted to the twisted worship of the Sun Queen, though with no intent to share what true power he may discover. Thus was formed the Solarii Brotherhood. His first recruit was a man named Nikolai, who thought that Mathias was insane but left him to it to save his own skin, he wrote the Confessions of Solarii.

Believing the Sun Queen was guiding him, he directed the cult's efforts toward finding a suitable young woman, that would allow the completion of Himiko's ritual and finally allow his escape, calling such a female "The Key".

Arrival of the Endurance[]

Decades later, the MV Endurance, carrying an expedition to find Yamatai, which included the young, nascent archaeologist Lara Croft, was wrecked on the island, due to being ensnared by the storms. The team also included aspiring documentary film-maker Samantha Nishimura. Samantha was the Documentary Producer/Translator of the Endurance's expedition. She also believed herself to be Himiko's direct descendant. She, Lara Croft and the other six members of the expedition team survived the wreck.

Mathias encountered Samantha at a campfire, at which he also encountered Lara Croft. Tending to Samantha's injuries and listening to her stories of the Sun Queen and the Stormguard, Mathias realized that she was The Key. He abducted her while Lara slept, intending to use her to complete Himiko's ritual and took her to the Solarii base. She was later rescued by Lara. However, Mathias had made a deal with the leader of the expedition, the archaeologist James Whitman. An egoistical man who would sacrifice anything and anyone for his moribund career, Whitman agreed to abduct Samantha and bring her back to him in return for career-reviving access to the secrets of the Yamatai civilization. Mathias used Whitman to distract the Stormguard, at the cost of Whitman's life, allowing him to gain access to the Chamber of the Sun with Samantha. There, he began to perform Himiko's ritual to transfer her soul into Samantha's body.

However, Lara Croft had done her own investigation into the island's secrets and discovered the truth about Himiko and the curse on the island. Realizing Mathias' intent and convincing the others of what she had discovered, she made her way to the ancient monastery where the Chamber of the Sun was located with their help. As Mathias initiated the ritual, Lara was able to fight her way through the Solarii Brotherhood, the Oni Stormguard and get to the Chamber. Arriving, she found Mathias overseeing the transfer of Himiko's soul from her decayed form into Samantha's body. Lara stabbed Himiko's body through the heart with a flaming torch. This ended the transference and seemingly destroyed Himiko. Without her rage to supernaturally drive them, the storms surrounding the island dissipated and normal weather over the island was restored. Lara killed Mathias when he tried to kill her for interfering and made her way with Samantha back to the other survivors. With the storms gone, they were able to escape via a repaired boat.

However, this was not the end of the evil Sun Queen. Although the soul transference ritual failed once again, Himiko still managed to latch a small part of her soul to Sam and live on within her, causing her to be violent and to even have blackout periods. As a result, Sam is arrested for assault and committed to a mental institution.

After Sam is transferred to the Halberg Institute in Sweden, she apparently reverted to some degree of normalcy, even making friends with a nurse. However, Trinity took over the institute and put Sam in the care of Dr. Taffe, who seemingly caused Sam to take a turn for the worst, allowing Himiko to start exerting greater control over Sam's body. This came to a head one night when Sam escaped the asylum, killing a nurse in the process.

Whilst in Germany, Himiko realized that she was probably drawing attention, which would lead to Lara picking up her trail. Since Lara had already once succeeded in stopping her gaining full control of Sam, she would likely try again in order to save her friend. She sent out scouts to hunt for her and when her suspicions were confirmed, she ordered them to follow and kill Lara.

Upon learning that Lara was searching for and had acquired the Wei Mirror, Himiko became enraged as the Mirror was the only thing that could possibly remove her soul and destroy her once and for all. Himiko's forces were soon able to locate Lara and one of her followers threw a grenade in the house they believed Lara to be in. However, Lara had anticipated this and had already left the house, causing Himiko to think she was finally dead, allowing Lara to follow her with the Wei Mirror in hand. Believing that Lara Croft was finally dead, Himiko ordered her army to head to Yamatai, unaware that Lara was still alive and following her with the mirror, in order to save her friend.

Himiko continued on her journey towards Yamatai. She was tracked by both Lara and Trinity. As Trinity attacked the compound, Lara used the confusion in an attempt to abduct Himiko, while trying to reach Sam in the process. Himiko managed to wrestle herself free from Lara and escape in a van. However, Lara ran her off the road by launching a motorcycle in the van's path.

Lara took Himiko to a barn, where Jonah Maiava was waiting with the Wei Mirror, as well as a series of other mirrors, thus making it impossible for Himiko to open her eyes without gazing on the mirror and having her soul extracted.

Himiko and Sam began to fight for control of Sam's body, Himiko demands that Sam obey her, as she has belonged to her since before she was born and that Sam's body was rightfully her property.

Sam managed to break free of her confines, using a knife she had hidden on her person earlier; however, Sam gained enough control to stab herself in the stomach, much to Himiko and Lara's horror. Before losing consciousness Lara told Sam to open her eyes which she weakly did before blacking out. Himiko, who was still conscious, was forced to look upon the Wei Mirror as the sunlight shone upon it. Himiko's soul was sucked from Sam's body and trapped within the Mirror, along with the countless others Himiko had used the mirror on, ending the Sun Queen once and for all. Sam was rushed to the hospital and survived her self-inflicted stab wound.

Some villagers worshiped her

Evolution of the Sun Queen 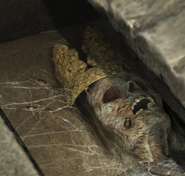 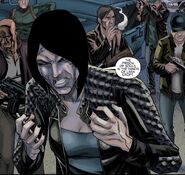 Himiko learns that Lara has Obtained the Wei Mirror