The Grenade Launcher is a recurring weapon in the Tomb Raider series.

The grenade launcher is the most powerful weapon in the game. One shot is usually enough to kill any enemy, with the exception of the Xian warriors. In this game, grenades are not affected by gravity and thus they travel straight and explode when making contact with anything. 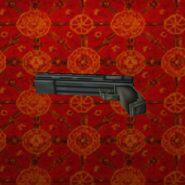 TR2
Add a photo to this gallery

The grenades bounce off walls and explode after some time, while in Tomb Raider II they explode on contact, regardless of what they hit. Each ammo pack for it has two grenades and is very scarce, so it's best to be conserved.

In Tomb Raider: The Last Revelation, the grenade launcher can utilize three types of ammunition:

Normal ammo: Large shells filled with plastic explosives. Explodes upon impact with a target, doing heavy damage. Often, the most common out of the three types.

Super ammo: Exactly like normal ammo but filled with more explosives. The most rare out of the three grenade types, but also the most powerful, often killing a normal enemy with one shot and doing extreme damage to bosses.

Flash ammo: When it hits the ground, it emits a glaring flash and a loud noise that blinds most enemies upon impact; However Lara won't be affected by it. It is the weakest out of the three grenade types, but can be very useful in a getaway situation.

Firing Rate: Must be reloaded after each shot, and slower than the shotgun.

Lara can take a grenade Launcher from "Heavy Mercenaries" in the later levels of the game. It can carry a total of fifteen grenades.

Lara Croft and the Guardian of Light Edit

Lara Croft and the Temple of Osiris Edit

Lara acquires a grenade launcher in the Solarii fortress. She attaches it to her assault rifle. It is able to kill several enemies, and destroy cover, It can be upgraded to fire Frag Grenades which offer more damage.

It has the added function of destroying metal barriers.

The multiplayer features a grenade launcher, with choice of ammo between, Frag Grenades, Incendiary, Grenades, Smoke Grenades and Flash grenades.

Rise of the Tomb Raider Edit

Grenade launcher is an attachments for the Assault Rifle that can be acquired from the vendor for 120 Byzantine Coins. Lara learns how to craft the ammunition for it using natural resources, as well as upgrading the heads to fire Cluster cluster bombs.

Retrieved from "https://tombraider.fandom.com/wiki/Grenade_Launcher?oldid=57916"
Community content is available under CC-BY-SA unless otherwise noted.