For the enemy who appeared in the original Tomb Raider, see Doppelgänger (Original Timeline)

The Doppelgängers were replicas of Lara Croft. Lara encountered two of them.

"Talk about being your own worst enemy."
―Lara Croft, regarding the Doppelgänger[src]

The first doppelgänger to be encountered was Tomb Raider: Anniversary, found in The Great Pyramid. Its appearance was of a skinless human with no hair.

The creature seemed to have very limited intelligence, as it was only able to mimic Lara's every movement. While it did not attack directly, shooting it caused damage to Lara herself.

Lara was eventually able to trick it into jumping into a pit of molten lava, destroying it. It is hypothesized that this doppelgänger was just an Atlantean creature copying Lara's every move because it did not have a motive, and it appeared to mostly serve as a preventive measure against intruders, who got through the pyramid.

It seemed however, to have some level of an independent mind of its own as it was seen screaming in fear when falling into the pit.

"I'm You. With the flaws removed."
―The Doppelgänger, to Lara Croft[src]

The second doppelgänger appeared in Tomb Raider: Underworld. It was created by Natla and Amanda Evert, and unlike the first version is easily able to pass for human. Mentally, the doppelgänger appears to be very much like Lara herself, sharing a similar personality and intellect; the main difference is her compulsion to follow the orders of anyone who knows the proper command word. In physical terms, the doppelgänger is far superior to Lara, possessing far greater speed, strength, and agility. While nearly identical to the real Lara, the doppelgänger does have some visible differences, the most notable of which are her glowing gold eyes and her red hair. Her overall appearance is closer to that of Lara's traditional Tomb Raider character model, with red hair, brown lips, and a hairstyle similar to that seen in Tomb Raider II.

During the course of Tomb Raider: Underworld, the doppelgänger is ordered to place a bomb in Croft Manor, which ultimately destroys the mansion. Zip, unable to tell the difference, later opens fire on the real Lara, believing that the bomb was her doing. Lara returns to the burning main hall to check the security cameras, where she encounters the doppelgänger face to face. She attempts to manipulate its behavior as she did the first doppelgänger, but it only plays along for a few moments before murdering Alister Fletcher and fleeing the manor. They had a second encounter on Amanda's ship at the Andaman Sea. There, she was able to subdue Amanda and dodge several lightnings from Thor's Hammer before escaping away. They met later in Helheim where she unarmed and almost killed Lara but their encounter is cut short by Amanda, who, using her Wraith Stone, knocked her out temporarily.

The Doppelgänger, finds a nearly dead Natla in Helheim who uses the control phrase "Ohk Eshivar", to order the doppelgänger to return her to her birthplace. Once stabilized, Natla orders The Doppelgänger to kill Lara, then herself. The Doppelgänger is horrified at the prospect of self termination, but is unable to rebel. She makes her way to Croft Manor to finish Lara.

In the meantime however, Lara had learned the command necessary to control her, and uses it to stop the doppelgänger in her tracks when she arrives. During a brief conversation, in which Lara questions the doppelgänger regarding her nature, it becomes clear that the former does not hold the latter responsible for Alister's death as it was just a puppet in Natla's foul game. Lara sets her free of Natla's control, and in return tells her to kill Natla with the words "make sure Natla suffers" . All too happy to cooperate with Lara, the Doppelgänger returns to her birthplace, destroys Natla's regeneration chamber, and watches with a smile as Natla herself drowns in a pool of eitr.

The fate of the Doppelgänger after this event is unknown.

The first Doppelgänger had no measurable personality, as she never spoke. She was mostly incapable of independent thought, and didn't seem to have a concept of self preservation, however it did seem to have the capacity for fear, as it screamed upon realizing it had been made to take a suicide plunge.

The second Doppelgänger was very similar to Lara. She was brash, cocky, and somewhat arrogant. Despite being bound to the control phrase, she didn't necessarily want to carry out her orders, this is seen when Natla orders her to kill herself, she is seen to frown for the first time. After Lara freed her from the control phrase, she seemed grateful, and bore no ill-will towards her. Taking Lara's advice, she sets out on a personal mission to eliminate Natla for good.

The first Doppelgänger was skinless replica of Lara.

The second Doppelgänger was more elaborately constructed. It had ivory skin, which appeared to be translucent, as it's veins were visible. It also had red hair, and glowing yellow eyes. It wore a black leather, vest, trousers, boots and gloves, and carried the same pistols as Lara. She also had a perpetual arrogant smirk.

The First Doppelgänger possesses the same acrobatic skills as Lara. Doppelgänger can fire shadow blasts from her hands, in lieu of shooting pistols, as it didn't have any.

The second Doppelgänger, although unable to throw energy blasts, is even more powerful. It can move faster than the eye can track, and is strong enough to kill creatures many times larger than itself with just its bare hands. It is also more intelligent, and can think independently. However it is easily controlled with the phrase "Ohk Eshivar", until Lara frees her from the obligation. 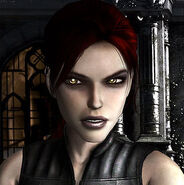 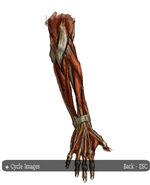 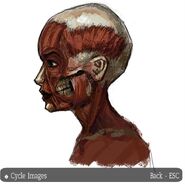