The Dagger of Xian is a powerful artefact that will grant tremendous powers to those who stab themselves in the heart with it. Whoever does this is turned into a mighty dragon. With the power of the dragon and a great army, the Emperor Qin Shi Huang of China used the dagger in a campaign to conquer territories long ago. The Monks of Tibet stood against him and managed to take the dagger from the dragon's heart, thus killing the monster and stopping the Emperor's advance into foreign territory. After the battle, the Monks decided to return the dagger to its Temple, near the Great Wall, where it remained for centuries.

Nowadays, the location of the entrance to the temple where the Dagger of Xian rests was discovered, and Lara Croft goes to China to search the site for the artefact. When she finally reaches the door to the temple, she finds it closed, with the key to open it missing and a mysterious Italian man called Claudio that tries to kill her. Lara stops him and starts interrogating the man. He says things about the Dagger, saying that those doors are waiting for the "right one" and the "right time to arrive", and that he works for a cult (Fiamma Nera) led by Italian mob chief Marco Bartoli. But he doesn't talk much else, because he kills himself by drinking poison. Lara then used the guy's laptop to discover that Bartoli lives in Venice, and goes there to search for clues about Marco and the key to open the door.

After several trips, surviving attacks by Bartolli's men and collecting artefacts such as the Seraph and the temple's key called the Talion. Lara finally opens the temple to retrieve the artefact. However as she reaches the dagger's resting place, she falls through a trapdoor and is the victim of several monstorous booby traps.

Eventually she finds her way back up and watches Bartolli plunge the dagger into his heart. His men then take him away to the Dragon's Lair. When Lara reaches the place, Bartolli's corpse turns into a fearsome fire breathing dragon. Lara shoots at him and manages to stun the ferocious beast. She then removes the dagger and Bartolli is reduced to a skeletonal corpse. The lair then begins to crumble and Lara escapes with the artefact in her possesion before the whole area is destroyed.

The pedastel containing the dagger 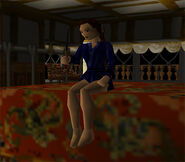 Lara admires the dagger at home

Add a photo to this gallery
Retrieved from "https://tombraider.fandom.com/wiki/Dagger_of_Xian?oldid=57456"
Community content is available under CC-BY-SA unless otherwise noted.