In tomb raider 1 and tomb raider 2, crocodiles appear who can only swim or only walk on land depending on where they first appear. However, in Tomb raider: Last revelation, they can finally switch from swimming to walking, making them much more dangerous.

In the original Tomb Raider, crocodiles were to appear in Peru's Lost Valley but were later omitted in favour of dinosaurs. In the final game, crocodiles do not appear until the following location at St. Francis' Folly.

Add a photo to this gallery
Also in the original game but this time in the final version, an unused crocodile (land only) can be found in the WAD for Obelisk of Khamoon, though it is used nowhere in the level itself. 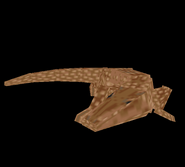 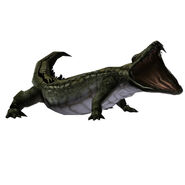 Anniversary
Add a photo to this gallery

Retrieved from "https://tombraider.fandom.com/wiki/Crocodile?oldid=57586"
Community content is available under CC-BY-SA unless otherwise noted.