The Bow is Lara's Primary weapon in the Survivor Timeline of the Tomb Raider series. It takes the place of the Dual pistols from all other timelines.

Lara uses several different bows over the course of the game. Which she either finds, makes, or is given. The bow is also initially used by Lara for melee purposes, with the bow itself being used to strangle enemies, and the arrows being used to incapacitate/kill foes during Dodge Counter/Kill.

Makeshift Longbow - Made of several sticks tied together. Has two available upgrades. Taken from a dead body hanging from a tree near the start of the game.

Recurve Bow - Made from a single piece of wood. Ornate patterns carves into limbs. Has Four Available Upgrades. Crafted by finding the first set of Bow Parts.

Compound Bow - A modern compound bow. Has six available upgrades. Given to Lara by Jonah, on Shipwreck Beach.

Competition Bow - A high-tech compound bow with a skeletal designed frame. Has 9 available upgrades. Crafted by finding the second set of Bow Parts.

Standard - Completely silent, can be used to create distractions, can be retrieved, used for dodge counter/kill.

Rope - Can be used to pull enemies off ledges, tear down platforms or cover, create zip-lines or swing from certain objects. .

Fire - Ignites enemy, or flammable substances/materials on impact. Can be used to light torches from afar or ignite gas leaks. They can be upgraded to spill a pool of Napalm upon impact.

Penetrating - A penetrating arrow that act as a standard arrow, which can penetrate an enemies' armor, or pass through soft targets to hit a multiple targets.

Recurve Bow - A hand-crafted bow balanced for effectiveness in all situations.

Dreamstinger - a crude but functional weapon of wood, skin, and bone that imbues your arrows with the Witch's pollen. Obtained by completing Baba Yaga DLC area. 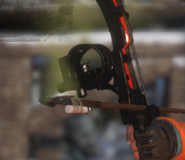 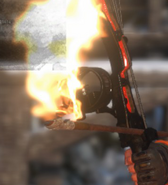 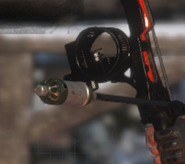 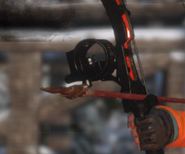 Shadow of the Tomb Raider[]

Atlatl Bow - A long range bow. Its construction is inspired by the same mechanics as the ancient Atlatl.

Exiled Fox's Bow - A supple bow made from a cinchona tree. Its taut bowstring looses arrows quickly, and deals higher damage to animals.

Heart of the Eagle - A powerful longbow, used by the Eagle Warriors of Paititi. This weapon is crafted for improved handling.

Puka Huk's Bow - Bow of the renowned herbalist Puka Huk, rumored to be able to step between worlds.

Recurve Bow - A bow that delivers energy more efficiently than the equivalent straight-limbed bow, giving a greater amount of energy and speed to the arrow.

Serpentwood Bow - An ancient shortbow, crafted from the heartwood of an Ipe tree.

Six Sky's War Bow - This is the bow used by the greatest Eagle Archer, Six Sky.

Heart of the Eagle[]

Heart of the Eagle