Jolie is an Academy Award winning actress, and is known for films such as Girl Erased, Mr. & Mrs. Smith, Salt, Maleficent and Eternals. She has also been a prolific tabloid figure, including her involvement with fellow actor Brad Pitt as 'Brangelina'. In recent years, she has become a notable humanitarian with her work with UNICEF and the UN, which was inspired by her time shooting Lara Croft: Tomb Raider (2001) in Cambodia.

Jolie initially turned down the opportunity to play Lara Croft, as she felt the character didn't suit her. She changed her mind when told that she could train with the British military.[1] Simon West stated that he struggled to get approval for Jolie to play the role of Lara from the studio. In an interview with Entertainment Weekly, West stated: "[She] had a great, dark reputation about her. [...] She spoke her mind, and she had a notorious reputation. It was quite hard for me to get her through the approval process at the studio, because I wanted an actress who was going to bring something to the part, and she brought this great Angelina Jolie mythology with her as this dark, crazy, wicked woman with a very particular and interesting personality. I wanted that mythology of Angelina Jolie to fuse with Lara Croft."[2]

Whilst a third film starring Jolie was green-lit and bankrolled, the actress turned down another chance to play Lara. In 2004, Jolie was interviewed by the World Entertainment News Network and stated: "I just don't feel like I need to do another one. I felt really happy with the last one. It was one we really wanted to do."[3] 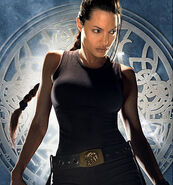