Start a Wiki
watch 01:12
'Tomb Raider' Profile: Amelia Croft
Do you like this video?

For Lara's mother in the other continuities, see Lady Croft disambiguation page.

"Know that I'm still with you Lara...my energy, my love, It's within you. It always will be."
―An excerpt from Amelia's final letter to her daughter.[src]

Amelia was engaged to be married to the Earl of Farringdon, as part of an arranged marriage, her parents and brother Atlas insisting that she had a position to uphold.

Amelia went to Oxford University to study art history. At some point, she was studying in the library, where she met Richard Croft. The pair hit it off, Croft shared some of his research and was impressed by her wit. Both were immediately smitten with the other. Their conversation grew to the point where they had to be shushed by the librarian.

The pair started a relationship much to her family's chagrin. When she brought Richard to meet them, they offered cold disinterest and thinly veiled contempt, as they considered him to be crazy, much like the rest of the world. However, she no longer cared for her family's wishes and broke off her engagement to the Earl of Farringdon.

However, Amelia and Richard's relationship wasn't perfect. She couldn't understand his obsession, and at one point, left him. Though he went after her and the two reconciled. Amelia moved in with Richard in his family home, Croft Manor. She briefly returned to her parents' house to collect her belongings where she was accosted by Atlas, who told her she was making a mistake. Though she disregarded him and left him to sulk as she left.

Croft proposed to Amelia in Luxor in Egypt. Amelia accepted without hesitation, deciding that she wanted Richard's passion in her life every single day. Richard wanted to wait for her birthday, however, she nixed the idea in favor of getting married immediately, and the pair found a small chapel and were married at sunset.

Amelia was prepared to relegate her painting to merely a hobby, though Richard wouldn't allow that to happen, and had a studio built for Amelia in the West Wing of Croft Manor, much to her delight.

Amelia later told Richard that she was pregnant, and he was overjoyed at the news. The pair immediately began brainstorming names. Amelia grew fond of one Richard suggested, Lara.

Lara's birth was difficult, though it's success lead to much relief and joy from the new parents. Richard left her to recuperate with their daughter, and to celebrate.

Amelia spent the next several years in happiness. Working from home, she spent a lot of time being a doting mother to Lara, spending what time she wasn't working on her own paintings, playing with Lara and giving her piano lessons. At a point, Richard headed to Tibet to find a monastery to further his research. Around this time, Amelia received a letter of acceptance, to have a gallery tour of her work. She felt conflicted, knowing that her husband would be heartbroken as the tour would require her to be away for over a year. She decided to postpone her decision for a while until after Richard's discovery.

En route to meet her husband, Amelia's plane crashed in the mountains. Knowing she would likely die, Amelia spent her final hours, writing two letters. One for Richard, urging him to become the father to Lara that she deserved. The other was to Lara. Which was more remorseful as Amelia would never see her grow up, though she wished her success, happiness and love in her future. Shortly after, Amelia passed away from the cold.

Amelia's body was found by Richard, who was heartbroken. Unwilling to accept the loss of his beloved wife, he attempted to resurrect her. Though his attempts were in vain, and Amelia remained gone. Richard took her body and returned her to England. He laid her to rest in the family crypt, in an elaborate marble sarcophagus. Leaving the letter she had written to Lara by it.

Croft who had believed that he would be overcome with crippling depression in the wake of laying Amelia to rest, instead further committed himself to his research and once and for all find the key to eternal life. However, this lead to him drawing the attention of Trinity, who after deciding he knew too much, had him assassinated.

Years later, Atlas, who had been appointed the executor of the Croft estate before the death of Richard, was attempting to force Lara out of the manor, claiming she had no legal claim to the manor, as he wanted to tear it down, in retaliation for Amelia's death. Lara while searching for her father's will, Lara uncovered her mother's final resting place. Finding comfort in her mother's words, Lara decided to restore the honor to her family name. When Amelia's death was verified, she gained full control of the Croft estate.

Amelia was very astute and clever, which was one of the reasons Lord Croft was so attracted to her initially as she could argue with him so elegantly.

Despite her upper-class upbringing, Amelia apparently had no qualms with "roughing it.". She also had a tendency to stay up late playing cards and drinking with Roth.

Amelia believed that it was important to face adversity head-on instead of cowering away from it, which likely stemmed from standing up to her family's attempts to make her live the life of their choosing and not her own.

Amelia deeply loved her husband, and was willing to go against her family's wishes in order to be with him. She sacrificed certain aspects of her own life to accommodate him, though not because he asked her, but because she was willing to compromise. She believed that he would compromise for her when the time came. Though premature death prevented her from ever finding out.

Amelia loved her daughter, unconditionally and spent the vast majority of her free time with her. One of her last acts before her death was writing a letter for her daughter, expressing her pride and hope that Lara would be happy, successful and loved in her life, hoping she would always pursue what she was passionate about and not let others deter her.

Amelia's relationship with her brother was deeply strained. Though this is more to do with his dislike of her husband, and his belief that he knew what was best for her.

After her death, Atlas swore revenge against Croft, wanting to destroy the family name.

Amelia was good friends with Roth. During her travels with Richard in Egypt, she spent several nights staying up late playing cards and drinking with Roth. Roth attended her wedding to Richard as one of the few guests.

Roth understood Richard's pain upon losing his wife and the lengths he was willing to go to bring her back. He assisted his friend although he advised against it on multiple occasions. 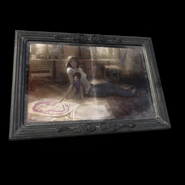 Amelia Croft worried, from 'Shadow of the Tomb Raider'

Add a photo to this gallery
Retrieved from "https://tombraider.fandom.com/wiki/Amelia_Croft_(Survivor_Timeline)?oldid=59730"
Community content is available under CC-BY-SA unless otherwise noted.