For Lara's mother in the other continuities, see Lady Croft disambiguation page.

Lady Amelia Croft, Countess of Abbingdon[1], née DeMornay, was the wife of Lord Richard James Croft and the mother of Lara Croft. She disappeared in the Himalayas in the early 1980s, being discovered in Helheim by Lara years later after Amelia had turned into a thrall.

Lady Amelia DeMornay married into the Croft family when she met archeologist Lord Richard Croft. Only a year later, she had their first and only child together - their daughter, Lara Croft.

Whilst flying over the Himalayan mountain range in Nepal, Amelia and Lara's plane crashed due to a technical error. They both survived. Following the crash, they sought shelter and warmth, eventually discovering a temple in the mountains. Upon their discovery, Lara found Excalibur a stone dias, and touched it out of curiosity. Upon doing this, a portal activated in front of them. Amelia immediately asked her to step back, as Lara noticed two figures in the light of the portal. Amelia began pleading with them to keep Lara safe. One of the figures was an adult Lara from the future, all the way in Bolivia. Future Lara begged Amelia not to touch the sword. The second figure in the light, Amanda Evert, told the Lara from the future to pull out the sword that activated the portal from their end, as there was a risk of an explosion. Amelia overheard this and desperately pulled the sword without hesitation. This caused for the portal to close, and Amelia to vanish in front of young Lara, leaving her disappearance a mystery.

In the years that followed, Richard Croft searched the world for a stone dias similar to the one found in Nepal. Richard parented and educated Lara with the help of their family butler, Winston Smith. The search for Amelia drove Richard to obsession, and after years of performing archeological digs, he sank into a depression and disappeared, being legally pronounced dead. [Note: In Tomb Raider: Anniversary, it is said he died in Cambodia.]

Despite presuming her mother was dead, Lara spent years of her own adult life reforging Excalibur to find out what had happened to her, and used Amelia's amulet to do so, which was otherwise known as the Ghalali Key. She did this with the help of her assistants, Zip, Alister Fletcher and Winston Smith - operating out of Croft Manor. This led Lara to Bolivia for her to discover that she and Amanda were the figures in the light from years prior, and was part of the exchange that caused her mother's disappearance. After blaming Amanda for what happened, an angry Lara threatened her for information on where the sword had sent her mother. Amanda told Lara that she was sent to Avalon, a place thought to only be a myth, and that she was still alive and not dead as Lara had presumed. Lara then informs her team that she plans on finding her mother after all.

On a sinking freighter ship in the Mediterranean Sea, Lara Croft is told by her rival, Jacqueline Natla, that Amelia is in Helheim - and that Helheim and Avalon are one and the same. Lara's search leads to the destruction of Croft Manor, and the death of Alister at the hands of Lara's Doppelgänger. When Lara gains control of Mjölnir, she attacks Amanda and the Doppelgänger before threatening Natla for information on how to enter Helheim. The two cut a deal, as Natla also needed Mjölnir to enter Helheim in search for the Midgard Serpent, with a plan to bring about the Seventh Age.

Upon travelling to Tibet, Lara meets Natla in who performs a ritual to open the doors of Helheim, which is completed by a blast from Mjölnir. Lara then enters a chamber to find the figure of Amelia overlooking over the Sea of Eitr. Lara calls out to her, but quickly realises as she turns around that she has been partially turned into a thrall. An upset Lara tells herself that Amelia had died long ago, and that the figure in front of her was not her mother. As the thrall attacks her, Lara shoots her several times, knocking her over the ledge and into a pool of Eitr.

Natla then taunts Lara who is overcome with sadness, telling her that she killed Richard Croft in Thailand and was responsible for turning Amelia into a thrall in hopes that Lara would help her to find the Midgard Serpent. She is then ambushed by the Doppelgänger and almost killed, until Amanda enters to save Lara. Lara and Amanda worked together to defeat Natla and an army of thralls, destroy the Midgard Serpent and escape Helheim. Returning to Tibet, Amanda and Lara exchange some heated words, but Amanda leaves before a fight can begin when she loses her powers. Lara takes a moment by herself to say goodbye to her mother, accepting her death and gaining closure before leaving.

Amelia was a loving mother, putting the safety of her daughter before her own well being. Amelia took an interest in Lara's drawings of yeti, and told her that she didn't have to be cold should she not want to be. She made sure that Lara was wearing a seatbelt before securing her own during the plane crash. When the portal was activated in Nepal, Amelia made her decisions based on what would keep Lara safe.

Amelia was mostly level headed and collected during serious situations. She was able to hide her fear during the plane crash, asking Lara to close her eyes during their descent. However, when it came to pulling out Excalibur from the stone dias, Amelia panicked and screamed - with the brash decision causing her own disappearance. 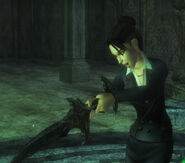