"How often does a guy like me get to be a hero? The others are counting on us. Go! Now!"
―Alex's last words[src]

Technician of the Endurance

Crew of the Endurance

Alex Weiss was an American electrical engineer and hacker serving as the technician of the Endurance during their expedition to discover the lost kingdom of Yamatai.

Alex grew up alongside his sister Kaz. He had a good relationship with his father, as he and Kaz bought him a gold pocket watch citing him as the "world's best dad." After his father's death, Alex inherited the watch.

At a young age, Alex developed a love of technology. He learned how to hack, aged nine.

As an adult, he made a living largely through legally questionable means, though only what he considered a "victimless crime" though his definition of this was very wide.

Alex came to Roth for sanctuary after hacking into several government databases. Roth seemed hesitant, though Jonah said that he could be useful. to them. Alex even offered to work for free, though Roth dismissed the idea, that if the rest of the crew got paid, Alex was to get paid, allowing him to stay aboard.

Alex seemed initially interested in the myth of Yamatai, though he saw it more as conspiracy as opposed to the academic pursuit that Lara saw it as.

After setting up, Dr Whitman visited Alex, Alex didn't take to Whitman, having looked up who he was and being disgusted with his past digressions. However he did offer a potential solution to their funding problem, by using a software he created to hack gambling sites, citing it as 99.9% untraceable. However the "0.1%" occurs and Alex throws his computer overboard before he can be traced.

Before the expedition begins Roth has Alex forge permits for their travel.

During the trip Alex, hacked into satellites show the storm activity in the Dragon's triangle, to show the risk involved, in going there, though he didn't argue with Lara's plan to go in regardless, and seemed enthusiastic at the prospect of experiencing the storms first hand.

Alex fell overboard at a point, while trying to install a device that would grant the crew Wi-Fi access.

At one point he was in the engine room with Reyes, slacking off while trying to diagnose a problem, claiming that it was mechanical and not electrical, though he was proven wrong, and Reyes berated him.

He also served as a cameraman for Sam.

After the Endurance begins to sink, Alex manages to get to shore, along with Jonah, Reyes, Grim, Whitman and another crew member, who appears to either be dead or dying, and Alex tries to give him CPR, which ends up being unsuccessful, as the crew member is never seen again.

The group get a signal from Roth and head inland to his location. They come across Lara, who is stuck in a bear trap. Lara informs them that Sam has been taken by Mathias. Reyes suggest that the group split up, so they can look for Sam and meet with Roth. Alex volunteers to go with Lara, but Whitman says that he will do it. Alex goes with the rest of the group, to find Sam.

When Lara heads to the radio tower on top of the mountain, Reyes gives Alex their radio so he can talk Lara through the process to fix the tower. When she informs him that the control console is destroyed, Alex tells her that the only other option is to patch it manually from the maintenance box, which given the time period of the transmitter, it would likely be placed very high up, much to Lara's dismay. When Lara got to the maintenance box he talked her through the procedure to boost the signal. He celebrated upon hearing the Pilot respond to Lara's distress call.

Alex later calls Lara after the plane crash to reassure her that there will be another way off the island. Lara asked about Sam, and Alex told her, they tracked her to an old Japanese palace, and jokingly said that Sam was probably just sightseeing. Lara told him to be careful before wishing him luck. Some time soon after, he was captured, along with Reyes, Jonah and Grim, though Grim managed to escape.

Alex is locked in a cage in the geothermal caves with Reyes and Jonah. One of the Solarii members shoots arrows at them through the cage. Lara arrives and dispatches the guards. Alex, Jonah and Reyes cheer for her, Lara sadly informs them of Grim's death, causing them a great deal of sadness. Lara sets about freeing them from the cage, but in the process, starts a fire and seismic activity which causes the cave to collapse. Lara tells them she needs to find Sam and orders them to leave.

They manage to retrieve their gear, and come across Sam, who Lara has freed. but are cornered by Solarii. Sam tries to wave the Helicopter Lara and Roth are on down, while Alex helps fend off the Solarii. After the helicopter crashes the group makes their way to the crash site, where they find Lara sitting forlornly beside Roth's body. Reyes rushed towards them, saddened and angered by Roth's death. They group make a funeral pyre for Roth, on Jonah's Suggestion that they send him on like a warrior. Reyes angrily suggests that she they fix a boat down on the beach and leaves, Lara tells them that no matter what they do the island won't let them leave. Alex tries to reassure her, that they just need to "regroup, come up with a plan." Lara tells them that there is a force that something is keeping them there. Reyes says Lara is delusional, though Alex jumps to her defense by saying that, he usually goes for weird explanations, but the island is off the charts. Lara says that she needs time, and Alex departs with the rest of the group to head to the beach.

Alex calls Lara in the morning, telling her that they got to the beach, and that the boat was in bad shape, and that they didn't have the right tools to fix it. Lara tells him "See what you can do." and that she is on her way. Alex volunteers to get Reyes' tools from the endurance, in order to help. Alex attempts to sneak back on board the Endurance, which is being stripped by the Solarii for salvage, to recover Reyes' repair tools for the PT Boat. In the process, he is discovered by the Solarii and falls into the ocean. He manages to make it onto the ship, and gets to the engine room. He retrieves Reyes tools, but a pipe falls on him, injuring his leg, and pinning him to the ground.

Lara arrives at the engine room where she clears the door and finds Alex trapped. Lara seems happy that he managed to find the tools, Alex jokingly celebrates that he finally managed to impress her. Lara tries to to free him, though she injures him further, Alex tries to lighten the mood, causing her to laugh nervously. Solarii attack them, Alex manages to kill the initial attackers by shooting a gas line, which causes several smaller explosions, knowing that if Lara doesn't leave him, she'll die, Alex orders Lara to flee with the tools. Lara refuses, though Alex has accepted his fate, more Solarii arrive and continue to shoot at them, Alex tells Lara one last time to leave, his tone commanding. Lara wordlessly takes the tools, before leaving, she kisses Alex on the cheek, to say goodbye. Alex provides cover fire as Lara escapes with Reyes' tools, shutting the hatch and sealing him in the room with his attackers. Seeing the hatch shut, running out of ammo, Alex turns and fires a pistol round into another gas line, causing a massive chain reaction of explosions that kills him and causes the quarterdeck of the Endurance to sink below the water as Lara escapes. Lara is very distraught about Alex's death, as a result, she vows to not let anyone else from the crew die.

In the first issue of the comic series, Alex appears in Lara's dream as a fiery specter of himself along with Roth and Grim, who also bear the injuries of how they died, attempting to make Lara stay with them. Lara then wakes from the nightmare. It is revealed that Lara keeps a picture of Alex in a box, along with pictures of the rest of the Endurance crew.

In the fifth issue, Alex appears in the dream of a drowning Lara. He appears half decomposed, and as the conversation goes on he catches fire. He apologizes for his appearance and says that he is lonely, asking Lara to stay with him. Lara claims he can't be real and apologizes. Alex accepts that she cannot stay and asks her to give his pocket watch to his sister, before telling her to go or she will die.

In the seventh issue Alex appears to Lara again as a hallucination on top of Snowdon, in a zombie-esque appearance, even rising out of the ground. He asks Lara to save his sister, claiming "they" are after her. Lara is scared by Alex's sudden appearance and as a result, she falls of the edge of a cliff. Lara honors Alex's request, saving his sister from the people who were hunting her and giving her his pocket watch.

Alex is a very talented hacker, stating that he has 15 years of experience doing so, he was able to uncover information on Whitman regarding his divorce and financial difficulty in a very short span of time.

Alex is very good at fixing electronics, being used to fix electrical problems in the Endurance's engine room.

Alex's skills in combat are at least competent. He carries dual pistols, and is briefly seen using a submachine gun to fend off the Solarii.

Alex is characterized as a "genius" but also as being quite lazy, and would rather not spend a lot of time on anything. He is portrayed as being rather carefree, much like Sam. He seems to be on friendly terms with everyone on the crew, except Reyes who is constantly shown to be irritated by him. Roth initially seemed reluctant to help him, though he decided to keep him aboard, as he could be useful, and shot down Alex's idea of working for free, citing that he would get paid, if the rest of them did.

As such he's also very talkative, and is quick to joke or be sarcastic. This has lead him to incur Reyes' ire, and even occasionally earned him an irritated eye roll from Lara. He admitted to using jokes in order to hide how scared he truly was, and that he felt like he was going out of his mind.

In one of the "documents" found on the island, written by Alex, it is shown that he had a crush on Lara, though the extent of Lara and Alex's relationship isn't really established. They seemed to be on good terms, though Lara was shown to be annoyed by him at times. She called him "Strange" but also "Sweet" and "Brilliant". He was able to make her laugh, even during some dire moments on Yamatai, and he was always quick to try and reassure her. Alex went to retrieve Reyes' tools, partially, because he hoped Lara might finally notice him in the way he noticed her. After being trapped on the Endurance, Alex forces Lara to leave without him, not willing to let her die because of him. Lara leaves, giving him a parting kiss on the cheek, and Alex sacrifices himself to save her. Lara is deeply saddened by Alex's death, which causes her to vow not to let any of her remaining friends die. Lara later begins to have dreams and hallucinations about him, due to her survivor's guilt. 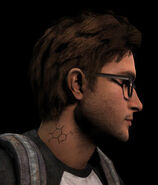